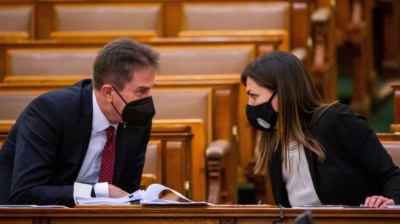 State Secretary of the Justice Ministry Pal Volner has tendered his resignation after Hungary's chief prosecutor sought to lift his parliamentary immunity on December 7 in a rare case of a corruption scandal that has actually led to the fall of a senior Fidesz politician.

Opposition parties have called for the resignation of Justice Minister Judit Varga in a joint press conference, calling the case the largest corruption scandal in years.

The fall from grace of Volner could be a message to Brussels in the rule of law debates that the prosecutors’ office does actually try to tackle graft, some analysts noted. Brussels is holding up recovery funds to Hungary because of its failure to prosecute corruption.

Volner, an MP for the ruling Fidesz party, is accused of accepting bribes of HUF2mn-5mn (€5,470-13,670) on a regular basis for a sustained period from Gyorgy Schadl, head of the Hungarian Chamber of Bailiffs (MBVAK). Volner was a commissioner in charge of overseeing the sector since mid-2019.

Akos Hadhazy, an independent MP who was a former member of green party LMP , was the first to report the investigation against Schadl on social media. Schadl was arrested last month at Budapest Airport before departure for an exotic destination. There was a press blackout on the issue.

The lack of transparency surrounding the sector and horror stories from foreclosed homeowners have popped up from time to time in the press. Opposition parties have long criticized the practice of evictions and corrupt practices behind the process.

The government had tightened rules and required law degrees for bailiffs to practice their profession. This has led to tensions and a scramble for lucrative positions. According to Hadhazy’s sources, bailiffs' jobs were given away for money, and a kickback was paid to a senior official in the justice ministry.

The suspected involvement of Volner in the corruption scandal warranted great secrecy in the investigation, according to Hadhazy, who uncovered the corrupt allocation of tobacco retail concession to people close to Fidesz in the early 2010s.

Pro-government news site origo.hu learned that personal revenge could be behind the scandal, but did not mention the political aspects.

Hadhazy’s comments to independent weekly Magyar Hang, one of the few media outlets barred from the weekly government press conferences, seem to confirm this scenario.

An aquaintance of a senior Fidesz politician paid a substantial sum to get into the business, but was eventually replaced by someone with a better connection. The businessman, who felt cheated, then filed a complaint in revenge, Hadhazy said.

There are currently 12 suspects in the case, eight of them are bailiffs and one is a deputy bailiff. Six suspects are currently in custody and one person is under house arrest.

Volner’s name has surfaced in the Hungarian press in recent months, following the wiretapping scandal. The state secretary was in charge of authorising the use of Israeli military-grade spyware Pegasus, according to his superior, Justice Minister Judit Varga

Opposition parties called on Varga to resign at a joint press conference.  Parbeszed deputy group leader Olivio Kocsis-Cake called the affair "the most serious corruption scandal of the government",  with the involvement of a state secretary who "had ordered the surveillance of persons".

Other politicians said Volner, who was  "as a key player in the Pegasus affair", must resign from his mandate. If that happens then Fidesz will lose its supermajority in parliament.  Proceedings against Volner can only be initiated if parliament waives his immunity.