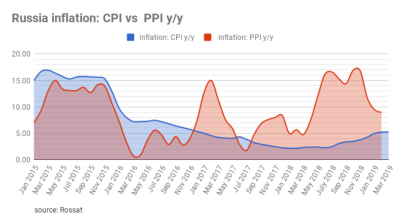 Russian CPI in March was at the lower bound of the consensus range. We see CPI growth as being close to its peak this year, however, the longer-term risk profile still calls for caution on the part of the Central Bank

Russian CPI accelerated from 5.2% year on year (y/y) in February to 5.3% y/y in March, at the lower bound of the narrow 5.3-5.4% consensus range and slightly better than our initial expectations.

The key reason for the very modest acceleration in CPI despite the recent VAT hike from 18% to 20% is that the food and services CPI stopped accelerating, staying at 5.9% y/y and 5.1% y/y, respectively. The only segment that continued showing faster price growth was non-food, up from 4.6% to 4.7% y/y, despite some slowdown in gasoline prices from 9.6% to 9.4% y/y.

The numbers come as a confirmation of lower near-term inflationary risks mentioned recently by the Central Bank, as the better-than-expected CPI is supported by: 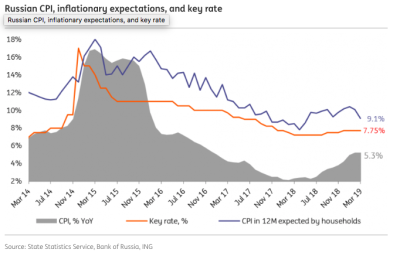 Overall, all else being equal, we see CPI approaching the peak of c.5.5% y/y in the coming months, with the balance of near-term risks skewed to the downside.

At the same time, the longer-term CPI risk profile remains uncertain. Mainly, we are surprised that the initial reaction to the VAT hike was apparently very modest, estimated at 0.6-0.7 percentage point (ppt) by the Central Bank recently vs. its earlier expectations of 1.0 ppt and our more pessimistic estimates of 1.0-1.5 ppt. While partially this effect may have been realized already in 2018, the strong deviation may suggest that the pass-through has been slowed down by retailers at the expense of their margins. The potential for further absorptions is under question, as PPI growth (currently at 9.0% y/y) has been materially exceeding that of CPI since the beginning of 2017.

Coincidentally, according to Rosstat, profits in the retail trade sector have been declining in the previous two years - by 16% cumulatively in 2017-18. Our understanding is that should consumer confidence improve later this year - as the state spending on social support, public sector salary indexation and infrastructural projects kick in in 2H19 - it will translate in additional inflationary pressure.

The same principle applies to the current gasoline price freeze, which has recently been extended till 1 July. Our understanding is that at the current oil prices the sales of oil products on the local market are less attractive for the downstream majors than exports, which makes the longevity of the deal dependent on the government's readiness to subsidise the local price freeze from the budget. The preference to do so may diminish if consumer confidence recovers in 2H19.

Finally, the RUB performance, which may have been disinflationary in 1Q19, is now subject to higher uncertainty given the likely shrinking of the current account, as we mentioned in our recent note Russia: Lower FX purchases in April - small consolation to RUB.

Overall, our short-term view on CPI is positive, with the peak likely seen at 5.5% or lower, which may provide further support to the upbeat mood on the Russian FI market. Meanwhile, the market should be mindful of the delayed pass-through of PPI, which may prevent CPI's fast return to the targeted 4%. 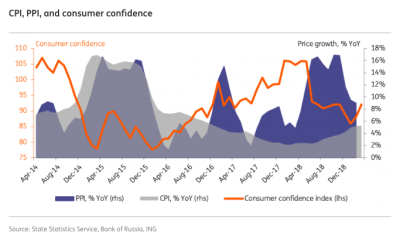