COMMENT: Russia’s economy obviously isn’t doing well but neither is it “collapsing”

The architects of the US Cold War policy of “containment” are sometimes known as “the wise men.” Even among successful statesmen, they were possessed of uncommon wisdom, foresight and perspicacity. James Baker, George H.W. Bush’s secretary of state and the man chiefly responsible for setting American policy during the collapse of communism, was cut from a very similar mold.

Among Baker’s many wise observations was the following: “every achievement contains with its success the seeds of a future problem.” Baker had in mind the collapse of the Berlin Wall, which, while undoubtedly a triumph for the West, also created long-term risks for the US-Russia relationship.

Baker’s point, however, can also be taken in reverse. Rephrased very slightly it would be something like the following: “every problem contains within itself the seeds of future improvement.” Even situations that, at first glance, might appear uniformly bad also set in motion other trends that can counteract (or at least ameliorate) negative tendencies.

It's worth keeping this dictum in mind when examining Russia’s (genuinely weak) recent economic performance. The growing weakness of Russia’s economy, combined with the dramatic confrontation over Ukraine, has gotten a lot of the Western media up in arms. The New Republic's Julia Ioffe was, as usual, among the most outspoken. She painted an apocalyptic picture of a country that was on the brink of utter collapse:

"While we were all panicking about Ebola... the bottom dropped out of the Russian economy... the ruble crashing won’t change anything today or tomorrow, but this is just the system starting to eat itself, this is just the system starting to crack... No one knows when one of those cracks brings the whole thing down, but there's a growing sense in Moscow that it will happen sooner than we all think. Putin seems intent on it."

There’s a little bit of hedging interspersed throughout the article; Ioffe is an intelligent and careful enough writer not to predict precisely when Russia’s economy is going to implode, but the overall takeaway is clear: due to the stupidity and fecklessness of its political class, Russia’s economy is finished. It’s no longer a question of if, merely of when the whole house of cards will come crashing down around Putin’s ears.

Not much of an outlier

Ioffe rests her case largely on two indicators: inflation and the exchange rate. Russia has, indeed, performed rather poorly on these fronts. On other fronts, though, the data area rather more upbeat. In the first two quarters of this year Russia’s GDP actually increased: it didn’t grow very quickly, but it grew nonetheless.

Alfa Bank, Russia's largest private bank, recently forecast that the highly-touted decline in oil prices would lead to somewhere between a 0.4% and 0.8% decline in GDP. Declines in GDP are, of course, best avoided entirely, but a less than 1% fall in output hardly seems as if it will be the death knell of Putinism. The system has already dealt with a far more harrowing crisis in 2008-09 when the decline in GDP was orders of magnitude more serious than anything currently being forecast.

And while the recent spike in inflation is also problematic, price growth actually remains substantially lower than it was throughout most of the 2000s. Polls indicate that Russians are sensitive to price increases, but it’s simply not true that the current growth in prices is somehow unprecedented. 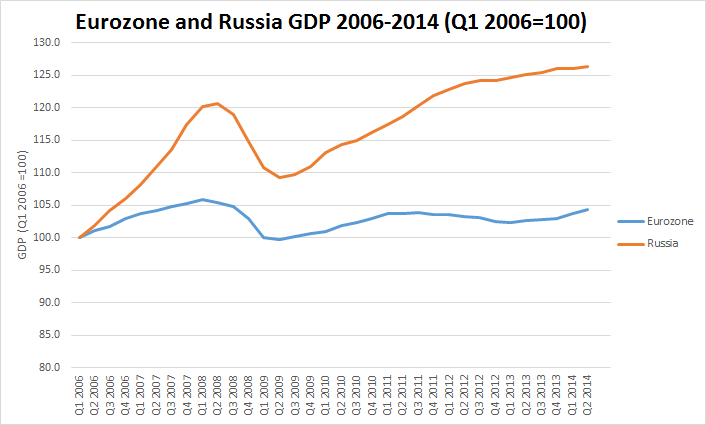 Yes the Eurozone attracts its fair share of derision and fear-mongering, but no respectable news outlet would argue that its “bottom has fallen out,” that its elite are “cannibalizing” each other, or that some kind of revolutionary system-destroying collapse was swiftly approaching. Instead, when people talk about the Eurozone, they use dry, emotionless and, more often than not, desperately boring technical language. The conversation is about “sovereign risk spreads” and “structural impediments to growth” instead of “cracks [in the system] bringing the whole thing down.”

Russia’s recent policy has very clearly been sub-optimal. There’s no point in defending moves like the ban on food imports because those moves have, even on their own narrow terms, been costly and self-defeating. But while the risks to Russia’s economy have unquestionably grown, the actual impact of these changes has so far been quite muted. Russian unemployment remains at a post-Soviet record low, wages are still (slowly) growing, and the economy has (so far) managed to avoid recession.

There’s nothing preventing this from changing in the future, and there is a significant likelihood of more serious economic problems in the future. The people dancing on Putin’s grave would do well to remember, though, that through the first half of 2014 Russia’s “collapsing” economy performed about as well as the Eurozone’s.