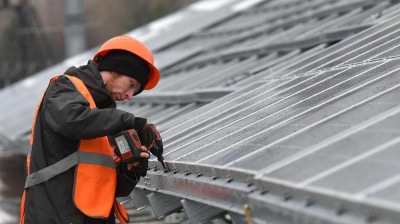 Labour-induced risks to growth are real, but dire demographic trends will not automatically condemn the region to a low-growth future.

Labour shortages in EU-CEE are not new, but recently they have become much more serious in some countries. This is having an important impact on intra-regional migration patterns, and could represent an increasingly big problem for growth in the coming years. Since Ukraine was granted visa-free travel last year almost one-in-ten have left the country to look for work in central Europe, which has eased the problem but is not a solution.

Eurostat’s job vacancy rate (a measure of unmet labour demand) has returned to or even surpassed pre-crisis levels in parts of the region. It reached a new high of 4.4% in the Czech Republic in the fourth quarter fo last year, above its 2008 level, and 1.6 percentage points higher than in Germany (where worries about labour shortages have grown increasingly loud in the last year).

In the Visegrád countries on average, the vacancy rate reached 2.3% in the thud quarter of last year (latest comparable data available – more than double the same period of 2014. 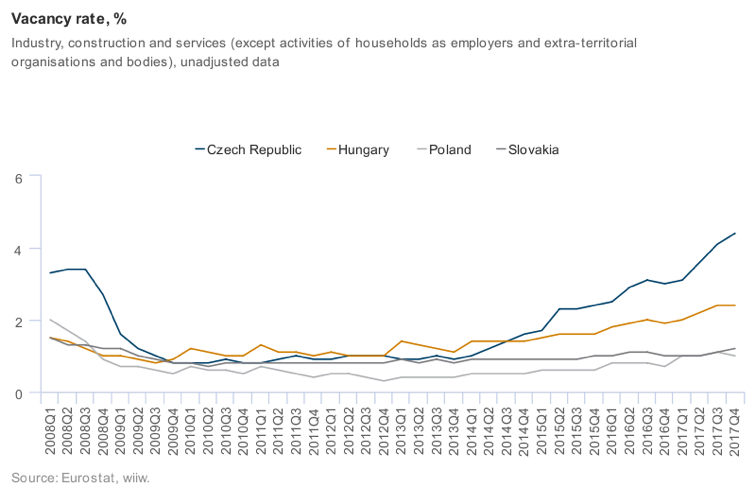 First, strong real GDP expansion is pushing up demand for labour (in 2017, aggregate growth in the eleven EU-CEE countries reached 4.4%, its highest level since 2007 according to wiiw data).

Second, emigration from most EU member states in CEE to Western Europe is continuing. 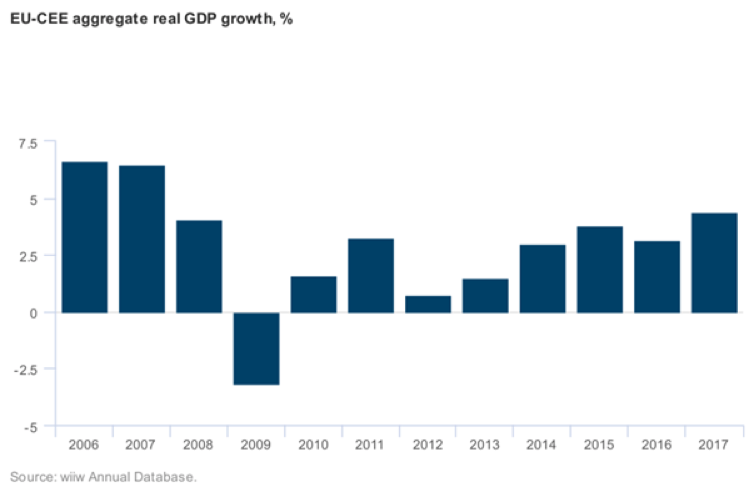 There are several possible solutions to these problems, of which two stand out.

First, is to attract migrants into both the European Union (EU) and wider Central and Eastern Europe (CEE) from other Eastern European countries, particularly from Ukraine where the economy is only slowly recovering from a virtual collapse in recent years, but also has a large population of well-educated and skilled workers.

Poland, Slovakia and the Czech Republic all have already put provisions into place allowing the temporary employment of Ukrainian workers. And the effects have been striking: more than 75% of new immigrants in Poland came from Ukraine in 2016 according to Eurostat (no doubt contributing to Poland’s relatively low vacancy rate in the regional context), along with 40% in the Czech Republic and 30% in Slovakia.

In reality the numbers are probably even higher, as official statistics do not capture the full extent of Ukrainian migration in the region. Since June 2017, Ukrainians have enjoyed a visa-free stay of up to three months in Schengen countries, and many have taken advantage of this to work (illegally), according to anecdotal evidence. Between 2015 and 2017 Ukraine lost 7% of its workforce according to the country’s National Statistics Service.

A second possible solution is the potential for a combination of higher wages and Brexit (the UK was one of the main destinations for workers from EU-CEE countries) to encourage émigrés to return home.

In the fourth quarter of 2017, nominal hourly wages rose by 6.4% y/y in the Czech Republic, 12.5% in Hungary, 6.5% in Poland and 4.9% in Slovakia, all well above the Eurozone level (1.7%). Data from the UK Office for National Statistics show that net immigration from EU-CEE to the UK has plunged since the Brexit vote (see chart below). 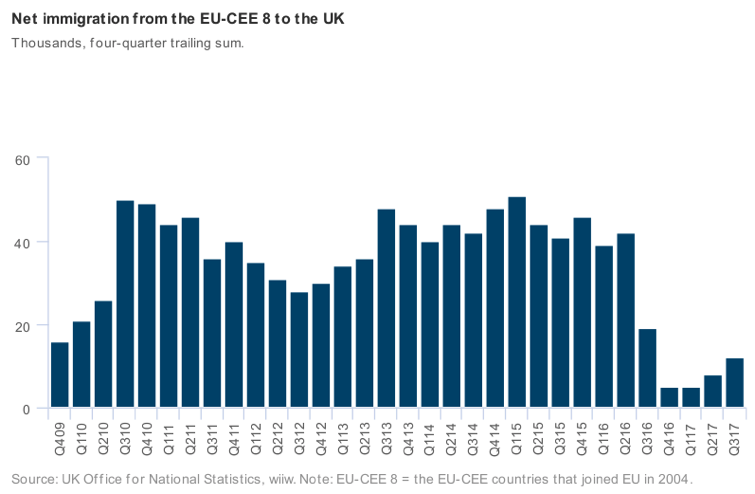 However, neither of these solutions is likely to prove durable. Migrants from Ukraine will not be enough to fill the gap.

First is the fact that the Czech vacancy rate is at its highest level on record, even with large-scale Ukrainian migration the country will not be able to fill all the empty workbench places.

Second, wiiw research has shown that Ukrainians emigration is short-term, with most going only for a few months to make some extra money. Few Ukrainians in Poland, for example, stay for more than a year.

Third, the data suggest that, at least in some sectors, wages in Ukraine are catching up with Polish levels, providing less incentive to migrate.

Finally, Ukraine is facing the challenge of demographic decline itself, implying that its pool of available labour will fall.

Meanwhile, Brexit is more likely to steer migrants from the Visegrád countries to other parts of the EU where labour shortages are apparent, and here Germany stands out, as it is also facing its own demographic crisis thanks to the very low replacement rate.

The wage gap between “old” and “new” EU member states remains huge. Our data show that wages adjusted for local costs are only around 50-60% of the Austrian level in the Visegrád countries (and even lower in much of the rest of EU-CEE).

Higher migration into the region from other places could be another solution, notably from Africa and the Middle East. However, this looks highly improbable in the current political context (and is also not likely to change). The Visegrád countries have fought hard against participating in the EU refugee-sharing scheme.

Long-term demographic projections for EU-CEE countries are undeniably negative. According to Eurostat, by 2025 the working-age population in EU-CEE will be almost 10% smaller than in 2015 (with the respective declines for the Visegrád countries in the 6-10% range), and trends will only worsen thereafter (see chart below).

There is a risk that companies will struggle more and more to find enough workers and, faced by ever higher wages to attract what labour is available, will simply move production away from the region. 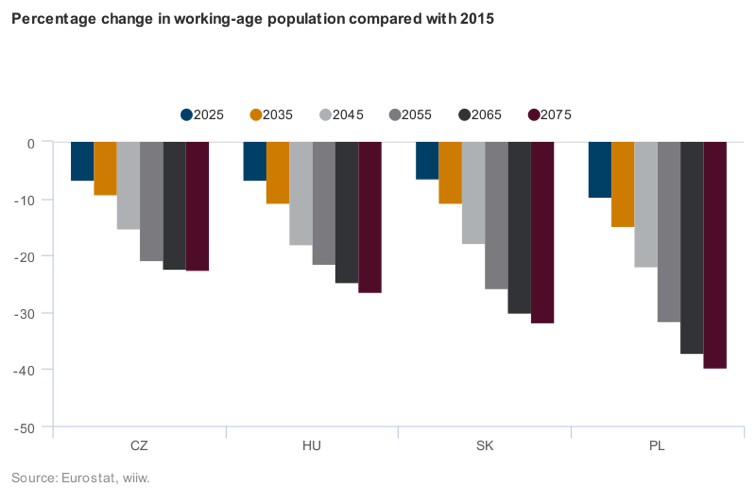 Potentially there is going to be a north-south tension as other poorer countries start to compete for labour with central and northern Europe, but that is still in the future. It is true that some production is already being moved to the southeast, to countries with lower labour costs such as Serbia and Macedonia. However, despite the demographic trends, the scenario described above is not inevitable, or even perhaps likely.

Another possibility is that the labour-shortage induced steep wage rises seen recently in EU-CEE could push firms to invest more in capital and automisation.

There are already signs that higher wages are driving improvements in productivity in the region. As wiiw highlighted in its recent Spring Forecast Report, rises in unit labour costs in EU-CEE over the last few years have lagged way behind headline wage increases. This also helps to explain why inflation has stayed so low despite labour market tightness.

Owners of capital in the Visegrád countries (chiefly Western firms) have big incentives to invest more rather than move production east on a large scale. Countries such as the Czech Republic and Slovakia enjoy huge advantages in comparison with their eastern and southern neighbours, including proximity to Western markets, better infrastructure, workforce quality, generally lower corruption perceptions, and the reassuring anchor of EU membership.

ING: Europe faces stiff competition for natural gas
4 days ago
PANNIER: Might Tokayev be the real deal?
8 days ago
OPINION: Bosnia economic salvage supplants breakup mood
14 days ago
ASH: Turkey is heading to “incumbent democracy”
14 days ago
RIMMER: You only sing when you’re winning
15 days ago