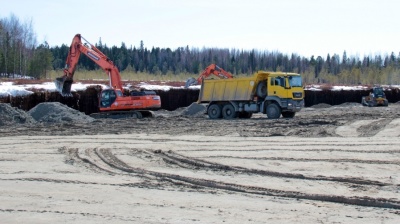 Construction of a a new landfill in the Khanty-Mansiysk region of Western Siberia. / Resursosberezhenie KhMAO
By Matthew Fisher and Ed Hicks of Cleary Gottlieb January 18, 2019

In the dying days of 2018, the Russian capital markets quietly passed a significant milestone: a refuse-processing company called Resursosberezhenie KhMAO listed on the Moscow Exchange the first green bonds ever issued by a Russian company. The proceeds of the bonds will be put towards the establishment of a municipal recycling and refuse processing facility in the Khanty-Mansiysk region of Western Siberia. While the transaction was small in size (RUB1.1bn, or $16.4mn), it marks Russian issuers’ long-awaited entry into the green bond market, and lays the groundwork for bigger transactions, including eurobonds.

What are green bonds?

Like any other bonds, green bonds represent an arrangement by which an issuer borrows money from bondholders in return for promising to repay the money borrowed, plus interest. Unlike conventional bonds, however, the money borrowed by an issuer of green bonds is earmarked for environmentally friendly purposes like renewable energy, clean transportation, sustainable waste management, and so on. Green bonds therefore allow issuers to burnish their green credentials while accessing the increasingly large community of ethical investors.

The risk is that unscrupulous issuers may describe their bonds as green even though the environmental benefits of the activities funded are at best questionable. To combat this ‘greenwashing’ risk, a market practice has developed whereby bonds marketed as green are expected to align with a ‘green framework’ – most often the ICMA Green Bond Principles under which Resursosberezhenie’s green bonds were issued. Such frameworks set out broad categories of potentially green projects (which are defined in detail in various market-led ‘green taxonomies’), and make recommendations as to disclosure, monitoring of the use of the funds and – importantly – review of the greenness of the bonds by an independent third-party (Rating-Agentur Expert RA GmbH in the case of Resursosberezhenie’s green bonds).

What took so long?

Following the first issuance of green bonds by a corporate issuer in late 2013, the global green bonds market has expanded extremely rapidly as awareness increases and the monumental scale of the task of complying with environmental targets becomes clear. Even in the past four years, green bond issuance worldwide has nearly quadrupled (see graphic below). 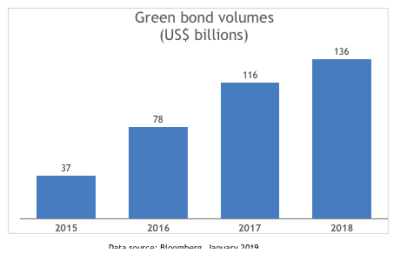 While the most active green bond markets are in China, the US and France, issuers from over 50 countries have issued green bonds. Yet, until now, Russian issuers were conspicuously absent. This was at first glance surprising, given that Russia has appeared ripe for green bonds for some time:

However, would-be Russian green bond issuers have been faced with a number of disincentives:

Resursosberezhenie’s green bonds raised roubles on Russia’s domestic capital market; the next milestone will be the issuance by a Russian issuer of green bonds to raise foreign currency on the international capital markets – in other words, a green eurobond. With the aluminium giant Rusal reported to have come tantalisingly close to issuing a $500mn green eurobond in January 2018, and prolific eurobond issuer Norilsk Nickel also having announced its interest in green bonds, there is good reason to think the next milestone is rapidly approaching.

Matthew Fisher and Ed Hicks are lawyers in the London office of Cleary Gottlieb. Their practices focus on high-value corporate/financial transactions in the Russia and CIS markets, such as the Rusal eurobond transaction referred to in the article.

Matthew Fisher may be contacted via email, LinkedIn or Twitter; Ed Hicks via email.

This article represents the views of the authors only and does not constitute legal or financial advice.