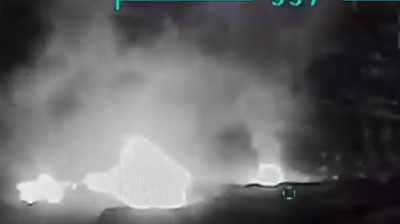 Armenia and Azerbaijan are on the brink of a full-scale war and observers should think twice before determining that analysis which concludes this could spiral into a wider conflict—bringing in (at the very least) Turkey and Russia—is simply alarmist. There is the prospect that hostilities could be dampened and contained, but the worst case scenario cannot be dismissed out of hand.

That is the consensus of bne IntelliNews correspondents who cover the South Caucasus. Better to be safe than sorry, international mediators surely know the stakes involved here. As if they needed reminding, Armenian Prime Minister Nikol Pashinian on September 27 called on the international community to ensure that Turkey does not involve itself in the conflict.

#BREAKING: It is now clearly known that #Azerbaijan Air Force is using the Bayraktar TB2 armed drones in the war against #Armenia. #Azerbaijani MOD has released this video showing destruction of an ammunition deport of #Armenian Army by one of them in #Artsakh/#NagornoKarabakh. pic.twitter.com/BnjlncifoM

#BREAKING: It is now clearly known that #Azerbaijan Air Force is using the Bayraktar TB2 armed drones in the war against #Armenia. #Azerbaijani MOD has released this video showing destruction of an ammunition deport of #Armenian Army by one of them in #Artsakh/#NagornoKarabakh. pic.twitter.com/BnjlncifoM

Non-verified, unconfirmed reports that regional bully Recep Tayyip Erdogan, Turkey’s elective dictator, has sent in hardened Syrian militia and numerous Turkish Bayraktar TB2 armed drones to fight on Azerbaijan’s side are especially worrying. Add in the fact that Erdogan is in a dreadful fix at home—with the Turkish economy on the brink of the abyss—and needs nationalist, ‘Ottoman renaissance’ causes to distract the Turks from their economic plight, and things start looking precarious for the peacemakers.

Turkey is already seen as a rogue Nato member that has angered the European Union by sending gas exploration vessels into east Mediterranean maritime territories claimed by Greece and Cyprus and by aggressively intervening in the Libya and Syria conflicts. Armenia, meanwhile, like Russia—which has a military base in Armenia—is a member of the Collective Security Treaty Organization (CSTO) intergovernmental military alliance, along with Kazakhstan, Kyrgyzstan, Tajikistan and Uzbekistan. An attack on one member should mean the other members coming to its aid, but Nagorno-Karabakh is internationally recognised as part of Azerbaijan despite the control over it exercised by ethnic Armenians, thus this provision should not be triggered unless fighting spills over into Armenia proper.

However, the situation is all too hazardous. As Dmitri Trenin, Carnegie Moscow Center’s director, tweeted: “Turkey’s invasion of Armenia would activate the CSTO treaty, which in turn might activate the North Atlantic one. Scary.”

Trenin added: “#NagornoKarabakh: no longer violations of ceasefire or border incidents. War is resuming. Time for Russia, France and US, individually and jointly, to stop it.”

On the positive side, relations between Turkey and Russia have, in the past few years, been relatively amicable, while complicated, as they always are. And that’s despite them being on opposing sides in the Syrian and Libya civil wars.

By the end of a fraught September 27, Armenia and Azerbaijan had both declared martial law, along with a total mobilisation in the case of the former. Azerbaijan's parliament rubber-stamped both martial law and curfews.

The Armenian government, as part of its martial law declaration, is requiring local media to cite only official Armenian information in military-related reports and is barring the use of Azerbaijani or outside sources.

Turkey warned Armenia to immediately cease hostility towards Azerbaijan that would "throw the region into fire”. But Armenia insisted it was Azerbaijan that started hostilities with a 7 a.m. missile attack along the Line of Contact that included the targeting of the capital of Nagorno-Karabakh, Stepanakert.

Mediators charged with resolving the four-decade-old conflict between Armenia and Azerbaijan gather as the Minsk Group, a platform established by the Organization for Security and Cooperation in Europe (OSCE), which is chaired by the US, France, and Russia. But it has struggled to show its influence and relevance in the past couple of years.

EU Council President Charles Michel said on Twitter: "Military action must stop, as a matter of urgency, to prevent a further escalation. An immediate return to negotiations, without preconditions, is the only way forward."

France and Germany expressed concern, while Iran called for an end to the fighting and offered to facilitate talks and a ceasefire. Pope Francis also responded to the fighting, calling it "worrying news". He said he was praying for peace in the Caucasus and asking for "steps of goodwill and brotherhood." There will be plenty of others praying tonight.