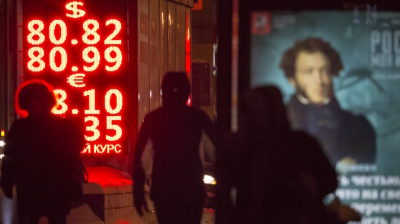 Western experts have been proclaiming the imminent implosion of Russia’s economy for more than a decade. For quite a while I was a lot more optimistic than most Westerners when it came to its economy; not any more.

The particulars of the indictments levied in the Western press over the years should sound familiar to anyone who follows Russia because they are, in essence, exactly what we hear today: the state is too big, the police are too grasping, the rule of law too weak and the business community too corrupt.

On the one hand this indictment is pretty hard to argue with, at least if you want to maintain any kind of standard of factual accuracy. If you look at international rankings and indices, even relatively apolitical ones from the World Economic Forum or the World Bank, Russia is, indeed, pretty corrupt, its political institutions rather weak and its legal system poorly regarded. None of this is a “plot” from the West to besmirch Russia’s greatness, it’s just a reflection of reality.

But life is complicated, and economic growth is not a morality play. If you look across the broad sweep of emerging markets, there are plenty of countries (eg. Mexico) which have governance problems that appear to be at least as severe as Russia’s and which nonetheless have been able to sustainably grow at reasonably quick rates. We might wish that only nice, democratic, transparent and well-run countries experience growth, but even a glancing look at the rest of the world shows that is obviously not the case.

For quite a long time Russia (like many other emerging markets) was able to keep its economy growing despite the many institutional weaknesses that have been highlighted above. The failures of Russian governance, were evidently not enough to stymie substantial growth in overall output and, for the first time ever, the development of a nascent middle class. The economic boom that Russia experienced in the period of 1999-2014 wasn’t “fake”, or some kind of statistical artefact. And it wasn’t just a story about oil.

Now, the situation has become a lot grimmer, and the boom of the early Putin years is firmly in the rear view mirror. Estimates of the Russian economy’s mid- and long-term growth potential have been in freefall, and even the International Monetary Fund and World Bank forecasts suggest stagnation is, if not a forgone conclusion, then a real possibility. Pessimism is more warranted than at any other point since Vladimir Putin first came to power.

How can we know that? Not because the Economist is writing nasty things about Russia’s government: it’s been doing that without interruption for most of the past two decades. The source of information underlying my pessimism is not a secretive or well-placed Kremlin source, a dissident journalist, or even a former chinovnik who has gone rogue, defected to the West, and started writing lengthy essays about the need for radical reform. It is far more prosaic. Indeed, the source is available to anyone with an internet connection. I’m talking, of course, about financial statements.

The state of Russia

With the easy availability of financial reports from state behemoths like Russian Railways, Rosneft, Gazprom, Sberbank, and VEB, I’m consistently amazed by the extent to which indictments of Russia’s economic performance tend to rely on thinly sourced gossip or anecdotes of unclear meaning.

But there is no need for any of that. All of the trappings of a really compelling and scathing indictment of the Kremlin (data that has in almost all cases been legally certified by a large Western accounting firm!) is there just waiting to be used.

The problem for media outlets that have been predicting Russia’s imminent collapse for years, though, is that a lot of the damage is of quite recent vintage. Consider the two following charts, one of which shows the debt/Ebitda ratio of a collection of large Russian state-owned firms (including Rosneft, Gazprom, and Russian Railways) and the impairment charges recorded by Vnesheconombank (VEB), a state-owned development bank.

Both show a rapid and escalating deterioration in performance over just the past two years. During 2014, Russian state companies started to lever up much more rapidly than they had in the past, while VEB’s loans were revealed to be, if not worthless, then worth a lot less than previously estimated.

What the above suggests, at least to me, is that the Kremlin did have a reasonably good handle on economic policy but that it no longer does. Its decision-making prowess, much like the results of the state firms themselves, has deteriorated rapidly in the period since the annexation of Crimea.

Indeed, you don’t need to go back very far into the past to find a time when, financially speaking, the Russian state sector was more or less healthy. Back in 2012, when there were few illusions about the fundamental nature of Putin or his system, one could have easily painted a picture in which Russia could merrily chug along almost indefinitely. Now, on the other hand, it’s all too easy to imagine a systemic financial crisis occurring within the next several years.

Analysis of Russia should, to steal a term from the diplomatic world, “de-link” the political and the economic. The Kremlin’s political stance has undoubtedly become somewhat harsher over the past several years, but there is a fundamental continuity in the sidelining or destruction of potential rivals. The economic realm, however, has seen a much larger variance in behaviour, from relatively effective management to the much more reckless and profligate style of the past several years.

As the costs of its recent profligacy become ever more clear, the Kremlin might be nudged back towards pragmatism. But if this occurs, we will not be able to divine it through a careful parsing of Putin’s speeches, the amount of television time given to various members of the elite, or random man-in-the-street anecdotes. Rather, it will be visible in exactly the same place that the most damning indictments of the government currently lie – in the finances.

COMMENT: Emerging European tightening cycle coming to an end
1 day ago
COMMENT: Does Russia have any friends left in Southeast Asia?
5 days ago
COMMENT: Will an Italian right-wing victory in upcoming elections be another win for Putin in Europe?
5 days ago
COMMENT: War as a sign of weakness: failure of reforms and of branding of a Russian nation.
12 days ago
HESS: Putin doesn’t fit with China’s plans for an alternative global financial order
13 days ago