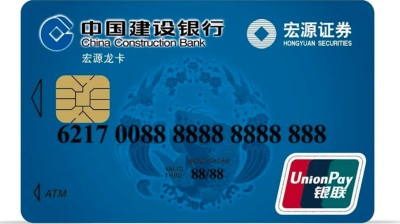 China has prioritised its business interests over helping its friend Russia dodge sanctions as its payment system UnionPay cools on doing business with sanctioned banks. / wiki
By bne IntelliNews April 21, 2022

Russia’s efforts to bypass the SWIFT sanctions that effectively cut it off from the global payment system took a body blow on April 20 after China’s UnionPay payment system said it is wary of cooperating with sanctioned Russian banks due to risk of being hit with secondary Western sanctions, RBC business portal reported citing unnamed banking sources.

As followed by bne IntelliNews, after Visa and MasterCard have pulled out of Russia, UnionPay would remain the only option for Russian banks to issue payment cards accepted internationally both offline and online.

Russia set up its own domestic payments service after possible SWIFT sanctions were mentioned during the initial round of sanctions imposed following the annexation of Crimea in 2014.

It uses the MIR card payment system to service card transations within its own borders, which means VISA and Mastercards issued by domestic banks in Russia still work, despite the pull out of both western companies.

Between banks Russia also has the System for Transfer of Financial Messages (SPFS), which is analogous to SWIFT, the messaging service that allows for international transfers, although the SPFS handles less messages and is less efficient.

Russia has been hoping to hook both systems up to the payment systems of its allies such as China. UnionPay is  a Chinese system that has been growing and used by an increasing number of international banks, hoping to cater to the growing Chinese international tourism traffic, but is far from universally available. Russian banks were very fast to start offering UnionPay enabled cards to their clients to give Russian an ability to use Russian-issued cards abroad, even if the number of banks accepting them are limited.

The Chinese payment system has been slow to advance the partnership as the US threatens to apply secondary sanctions to any country or company enabling Russian sanction-busting business ties. Russia’s banks are reportedly being forced to abandon projects related to UnionPay card issuance. The payment system continues to cooperate with those banks not affected by the sanctions, however, RBC’s sources said.

So far the SWIFT sanctions have only been applied to seven of Russia’s over 370 banks, but the two banks immediately singled out for a ban on SWIFT were the state-owned giants Sber (formerly known as Sberbank) and VTB Bank, which between them account for around half of all retail deposits in Russia.

Notably, Russia’s largest bank Sber will reportedly not issue UnionPay cards. Other banks that considered cooperating with UnionPay were Alfa Bank, Otkritie, VTB and PromsvyazBank, and Sovcombank, which are all on the SDN (Specially Designated Nationals) list of the US Treasury Department and so de facto cut off from working with dollars.

Sources told RBC that Sovcombank gave up the plans on its own, concluding that sanctioned Russian banks will not have their payment cards processed abroad, no matter the payment system.

Analysts and legal experts surveyed by RBC note that UnionPay using dollars in its operations exposes it to the secondary sanctions for dealing with SDN-listed entities. They remind that European banks such as Barclays and UniCredit previously had to settle with the Treasury’s Office of Foreign Asset Control (OFAC) for transactions with sanctioned entities.

Domestic Mir card payment and NSPK national payment systems were created by the Central Bank of Russia in 2015 to cut reliance on Western payment systems under pressure from sanctions for the annexation of Crimea.