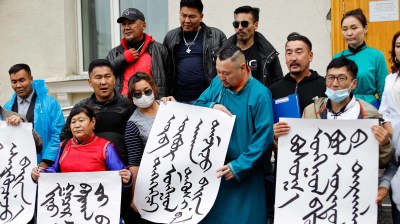 China's ruling Communist Party is to halt Mongolian-medium education in the country’s northern region of Inner Mongolia bordering Mongolia, Radio Free Asia has reported, citing an overseas-based rights group. Other reports described a process of transitioning away from Mongolian-medium education in favour of Mandarin Chinese teaching, with the first stage involving three subjects over the next three years in the autonomous region. Still, there are angry claims that there is a creeping cultural assimilation process under way.

Hundreds of teachers in the cities of Tongliao and Ulaanhad have been called to urgent, secret meetings at primary and secondary schools in recent days, where they were informed that the Chinese government has ordered them to switch to Chinese-medium education from September 1, the New York-based Southern Mongolian Human Rights Information Center (SMHRIC) said in a report on its website.

"The fate of Mongolian language education seems to be sealed," an ethnic Mongolian teacher said in an audio statement quoted by SMHRIC. "This is not only unconstitutional, it is also a flagrant violation of the basic human rights of the Mongolian people from a universal human rights perspective," the teacher said, adding that they and colleagues had been forced to sign non-disclosure agreements before leaving the meetings.

Inner Mongolians have been holding protest rallies and sharing their anger on social media as best they can. Mongolians to the north, meanwhile, have been enraged by the abuse and indignity that has been shown towards Inner Mongolians by the Chinese government.

On August 31, around 20 to 30 Mongolians, mainly nationalist group members, mounted a protest against the Chinese government's move. The protesters first tried to deliver a letter to Chinese embassy in Ulaanbaatar with a demand that Inner Mongolians be given the right to practice their mother tongue. The group was sent away by the embassy which said such letters must be delivered to the Mongolian Foreign Ministry for passing on.

The protesters said in a statement: "Mongolia's language is part of what makes a person Mongolian and if a person loses their language they lose their national identity." They added: "Our actions might not amount to something, but we cannot stand idly by as our brethren to the south lose their human rights."

The former Mongolian president, Elbegdorj Tsakhia, said on Twitter: "If a Mongolian does not have their own culture, history and language, he is not a Mongolian. 300 years of humiliation against Mongolians should not continue in the new century! I know that the leader of our southern neighbor, Xi Jinping, respects the language and culture of others. The suppression of the Mongolian language and culture is not the path for a great responsible nation."

Many of the protesters believe the Mongolian government will not do anything about the matter as Mongolia's economy is so dependent on China. The majority of Mongolia's exports go to China, including all of its exported crude oil, iron ore, copper concentrate and zinc concentrate, 96.3% of its coal, and 100% of its washed goat cashmere.

In 2016, when the Dalai Lama paid his last visit to Mongolia, China imposed fees on commodity imports from Mongolia, charging additional transit costs on goods passing through a border crossing into China’s northern region of Inner Mongolia. The government of Mongolia apologised to China for allowing the Dalai Lama to visit Mongolia.

The protesters believe the same will happen if the Mongolian government demands any action from China over the switch away from Mongolian-medium education in Inner Mongolia.

bneGREEN: Poorer cities the most exposed to climate change
A maze of smuggler tunnels: the Kyrgyzstan-Uzbekistan border
Tug of war emerging over what role Iran (and its oil) should play in new world order