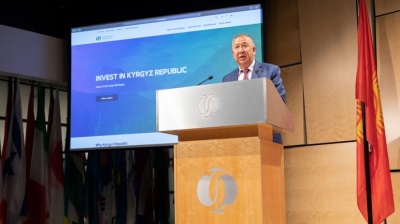 Then first deputy PM of Kyrgyzstan Kubatbek Boronov seen in late 2019 addressing the III Kyrgyz-British Investment Forum, held in London with the support of the EBRD and Chaarat Gold. / Chaarat Gold.
By Kanat Shaku in Almaty February 10, 2022

Warnings served by western governments that Kyrgyzstan might have damaged its foreign investment environment with the seizure by its government of flagship gold mine Kumtor seemed prescient on February 9 as Chaarat Gold Holdings announced financing and construction delays at its Tulkubash project in the Central Asian nation.

The delays, said London AIM-listed Chaarat, were driven by increased investor uncertainty resulting from the dispute between the Kyrgyz government and Centerra Gold, the Toronto-listed investor from which the populist Japarov administration seized Kumtor in May last year.

Chaarat, a company that once tried and failed to buy the Kumtor gold project, located at 13,000 feet in the Tian Shan mountains, said it now hoped to close debt financing for Tulkubash in the second half of 2022.

The project’s first gold pour, meanwhile, had been further delayed from 2023 to the second half of 2024, Chaarat added in a statement.

Chaarat said it expected a resolution to the Kumtor situation soon, allowing it to continue discussions around standalone financing or a comprehensive refinancing of its current outstanding debt along with financing of Tulkubash.

“Construction progress at Tulkubash was negatively impacted by the delay in our debt financing efforts,” executive chairperson Martin Andersson said in the statement. “The Kumtor situation had led to cautiousness in the market and until the issue is resolved, funding remains a challenge.”

In seizing the mine, the Kyrgyz government alleged Centerra was running the asset in a way that was detrimental to both the environment and nearby communities, something the company refuted.

Kyrgyzstan’s Japarov administration, which came to power following political upheaval in the country in late 2020, is facing international arbitration hearings pursued by Centerra over ownership of the mine, the largest taxpayer in the country.

The tactics deployed by nationalist strongman President Sadyr Japarov to wrestle the mine from Centerra’s hands were seen as especially aggressive and shocked foreign investors. So much so that the British government, cognizant of UK-based BlackRock Investment Management holding a 10.6% stake in Centerra, joined Canada in warning Kyrgyzstan that measures that “negatively impact trade and foreign direct investment will further undermine already fragile economic livelihoods of the Kyrgyz people”.

The International Monetary Fund (IMF) in June called for a “speedy and transparent” resolution to the dispute between Kyrgyzstan and Centerra over the mine.

The IMF noted that stable gold production was fundamental to Kyrgyzstan achieving its economic growth forecasts, which would require political stability, policy predictability and a market-friendly business environment.

BREAKING: Putin signs off annexation of four Ukrainian regions
52 minutes ago
Kremlin preparing for a protracted conflict by putting Russian economy onto a war footing
5 hours ago
Hungary’s forint slides to new low after central bank ends tightening cycle
7 hours ago
Slovak ministers criticise Czech border controls
7 hours ago
Might Trussonomics be a branch of Erdoganomics?
13 hours ago