Central Asian rain may be caused by Indian, Chinese pollution 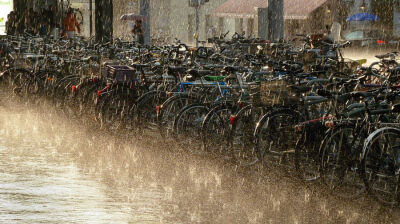 Despite a devastating drought in recent years, summers in Central Asia and Xinjiang are trending wetter, featuring more heavy storms and flash floods. New research points to a potential cause thousands of miles away.

When factories, cars and power plants in the industrial regions of northern India and eastern China burn fossil fuels, they release aerosol sulfates. These particles, such as sulfur dioxide, reflect sunlight, cooling the atmosphere and causing pressure changes that alter established air currents.

According to Xiaoning Xie of the Chinese Academy of Sciences and colleagues in a new paper in Nature: Communications Earth & Environment, this pollution is shifting the Asian Westerly Jet Stream (see map) southward while pulling moist air from the Indian Ocean into Central Asia.

The cause of Central Asia’s summer storms has been previously disputed, with other researchers examining the effects of greenhouse gases or the region’s rapidly thawing glaciers.

Xie and his colleagues focus instead on modelling the effect of hypothetical sulfate concentrations on wind and cloud patterns, using an established method that accounts for solar radiation and the resulting cloud-to-rain conversions. Their simulations project dryer monsoons in the subcontinent and eastern China and a significant increase both in summer precipitation and in the frequency of extreme precipitation events in Central Asia.

Xie and his team also model the effect of a hypothetical spike in black carbon soot, which they find would push the Asian Westerly Jet Stream in the opposite direction (to the north) and reduce summer rains in Central Asia. Spikes in the greenhouse gas carbon dioxide, they find, increase rainfall in Central Asia only in spring and autumn.

The research was funded by both the Chinese and US governments.

The aerosol sulfates may even explain Central Asia’s drought of 2021, the worst in decades. COVID slowed economic activity around the world in 2020 and 2021, leading factories in India and China to cut output. The drop in pollution and rainfall is consistent with the authors’ findings.

As Xie and his team have shown, human activity in one region can impact areas far away.

What the weather holds in store for Central Asia may depend on China’s attempts to reduce pollution on its eastern seaboard. “Regional emissions over Asia have been rapidly changing since 2010,” the authors note, falling in eastern China and increasing in the subcontinent. “How this change of aerosol emission distributions will affect [Central Asian] precipitation merits further investigation.”