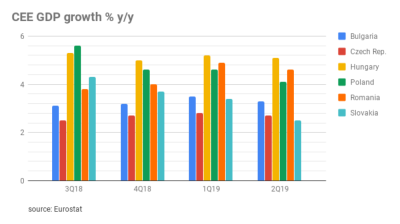 GDP growth figures from the second quarter of this year were down on the first quarter but showed that growth was still being supported in Central and Eastern Europe (CEE) by domestic demand that has gone some way to offsetting a noticeable slowdown in the Eurozone.

CEE has been booming for several years now, but all the countries in the region starting to run up against structural constraints, of which labour shortages is the most obvious.

At the same time the trade war between the US and China has damaged growth prospects, China’s own growth is also slowing and the World Bank has forecast a global economic slowdown. In particular the Eurozone barely grew at all in the second quarter of this year, according to Eurostat, and this is acting on a drag on the export orientated Central European countries. Germany’s economy, considered the engine of Europe’s regional economy, actually contracted. GDP growth in the 19-member “old Europe” region was a mere 0.2% q/q and 1.1% y/y. Germany’s economy contracted 0.1% q/q according to Germany’s Federal Statistics Office and grew 0.4% y/y.

“This was the softest pace since 4Q16 but it was still very strong growth given the context of weakness in the euro-zone,” Capital Economics said in a note.

At the country level, growth slowed in all countries in seasonally-adjusted q/q terms, but the slowdown was larger than analysts had expected in Poland and Slovakia while growth held up much better in the Czech Republic, Hungary and Romania.

What is holding up the Central European countries is they have to an increasing extent decoupled from Western Europe as domestic consumption now plays a larger role in their growth than it used to, as bne IntelliNews has previously reported.

“Detailed breakdowns of the data have not been released yet but the monthly activity data suggest that ongoing construction booms supported growth in Hungary and Romania. More generally, loose policy and tight labour markets are keeping domestic demand growing at a healthy pace in the region, which we expect to continue over the rest of this year,” Capital Economics said.

Domestic demand in Central Europe is set against the drag on growth by the cooling EU economies. Capital Economics reports that the increasing export weakness in the second quarter was taking a heavier toll on the Central European economies, particularly in Poland.

This slowdown also turned up in the manufacturing Purchasing Managers Indices (PMI) from the region.  Hungary's seasonally-adjusted PMI slumped to 51.3 points in July from 54.1 in June, the lowest figure seen in three years. And Poland’s PMI fell 1 point to 47.4 in July, remaining below the 50-point line separating contraction from growth for the eighth month in succession, IHS Markit reported on August 1. This was its lowest level since 2013. The collapse in the Czech Republic’s PMI was even more dramatic, as it fell to its weakest level in 10 years.

“With the manufacturing PMIs for July falling sharply and Germany’s industrial recession intensifying in June, we expect the weak external backdrop to take a bigger toll on regional growth over the rest of 2019,” Capital Economics concluded.