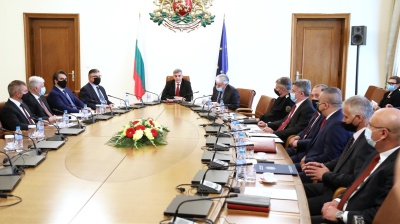 Bulgaria’s caretaker Prime Minister Stefan Yanev said that the country’s current agencies set up to fight against corruption are useless and ineffective and that many people believe they actually supported the development of a corrupt environment.

Yanev’s interim government, appointed until the July snap general election, has been probing events under the former government led by Boyko Borissov that lost power in April.

“It is extremely disturbing and humiliating to receive information from the outside for the existence of serious corruption practices, against which the competent state institutions apparently have not taken anything effective until that moment. These authorities until now have been not just ineffective and useless but doubts exist in the society that they have catalysed the development of corruption environment,” Yanev said at session of the Security Council he called after US sanctions were placed on several top officials and businessmen earlier in June.

Yanev also said that structures of the system for national security that are supposed to work according to the principles of political neutrality have acted in a biased way.

“This is a serious signal that corruption in Bulgaria has taken deep roots in the political and economic system of the country and that the problems have already gone beyond our national borders,” Yanev said.

The US blacklisted six individuals and dozens of companies over their involvement in significant corruption. The list includes businessman Delyan Peevski, fugitive gambling mogul Vassil Bozhkov, former deputy economy minister Alexander Manolev, former director of the state agency for Bulgarians abroad Petar Haralampiev and the agency’s former chief secretary Krasimir Tomov, as well as Ilko Zhelyazkov who is deputy head of the unit for control of the use of special investigative devices.

A few days after the sanctions were announced, the government decided to urgently compile a list of individuals who have been or could be sanctioned by the US and ban all public institutions from working with them.

Yanev’s government has revealed numerous corruption scandals in the weeks it has been in office.

These include defence contracts granted untransparently and without tenders, illegal organ transplants from live donors at a VIP hospital and suspected illegal wiretapping of dozens of opposition politicians.

However, prosecutors, led by chief prosecutor Ivan Geshev, a Gerb-era appointee, have been taking on the interim government. As bne IntelliNews reported earlier in June, Bulgarian institutions are in open conflict after the prosecution decided to raid the offices of key interior ministry employees appointed by caretaker Interior Minister Boyko Rashkov, and summon officials recently appointed by the interim government for interrogation.

Bulgaria’s specialised prosecution has now charged Angel Papalezov, who was appointed to head an investigation into illegal wiretapping of opposition politicians, with participating in criminal group headed by fugitive gambling mogul Vassil Bozhkov, prosecutors said in a statement on June 7. Papalezov was among several top officials appointed by Rashkov.

According to the acting head of the specialised prosecution, Valentina Madzharova, Papalezov was accused of shielding Bozhkov’s supposedly illegal collection of cultural objects, but that this has yet to be proved.

Papalezov has been accused of trafficking works of art and money laundering. The prosecution gave no details.

Several days later, another opposition politician, Nikolai Hadzhigenov of the Poisonous Trio, said he has evidence that more than 82 members of the opposition, as well as protesters, were illegally wiretapped during the mass anti-corruption protests last year and ahead of the April 4 vote.

However, on June 4 the prosecution said it found no evidence of illegal wiretapping of opposition politicians.