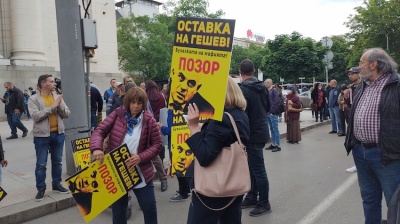 Bulgarian institutions are in open conflict after the prosecution decided to raid the offices of key interior ministry employees appointed by caretaker Interior Minister Boyko Rashkov, and summon officials recently appointed by the interim government for interrogation.

The “war” pits chief prosecutor Ivan Geshev — appointed through a controversial procedure while former prime minister Boyko Borissov’s Gerb party was in power — against President Rumen Radev and the caretaker government he appointed after no party managed to form a new government following the April 4 general election.

The interim government has launched a wide-reaching overhaul of the state administration and institutions, replacing top officials and initiating investigations into Gerb-era activities.

This includes a probe into the alleged wiretapping of dozens of opposition politicians during the months-long anti-government protests last summer and autumn and ahead of the April general election.

Late on June 1, Bulgaria’s special prosecution raided offices in the interior ministry and charged Angel Papalezov who is leading the wiretapping probe, with illegal use of special intelligence tools and money laundering.

According to information obtained by Nova TV, Papalezov was also accused of relations with fugitive gambling mogul Vassil Bozhkov who has been accused of various crimes and moved to Dubai to avoid arrest.

Among those whose offices were raided were other people investigating the wiretapping. The prosecution has summoned also for interrogation all key heads of institutions appointed by Rashkov in the last few days, including the new heads of the national security agency (DANS) and of the agency for the fight against organised crime.

The raids and the accusations were confirmed by government spokesman Antoni Kutev on June 2 who said institutions are heading for “open war” due to the actions of the prosecution.

“We see how, after the presidential institution, the prosecution is entering in the MVR [Ministry of Internal Affairs], which threatens to turn into open war between the institutions,” said Kutev, referring to the action movie-style raid of the offices of Radev’s advisors in July 2020. The raid was the trigger for the mass protests that took place daily for several months.

“We support the chase of crimes according to the law but we are against the attempts of intimidating key security services employees, as well as [against] the delay or prevent revisions in the internal affairs system,” Kutev said in a statement to journalists live broadcasted by Dnevnik news outlet.

He called on all institutions to work on restoring the rule of law.

Geshev’s latest move was seen as an attempt to intimidate everyone in charge of the wiretapping investigation.

When the news broke, it sparked a new protest against Geshev on June 2, with thousands of people demanding his resignation.

The protest grew later in the day as the leaders of the reformist Democratic Bulgaria called on all their supporters to gather after work in front of the court of justice to protest against Geshev. Members of the Stand up! Thugs out! party did the same. They claim that the prosecution’s actions are a large-scale attempt to get people scared.

Several thousand people turned out to demand Geshev's resignation after the prosecution decided to raid the offices of interior ministry employees. Although not as big as in the summer of 2020, the protest gathered more people than expected by the organisers from the Justice for All organisation.

“The thugs who are wiretapping opposition politicians and organisers of civil protests are on the one side and on the other side are we,” one of the organisers, Emil Georgiev, said.

“Geshev – disgrace! Resignation and Prison!” was the most popular slogan chanted by the crowd carrying posters accusing Geshev of being “The mafia’s bat” and a thug.