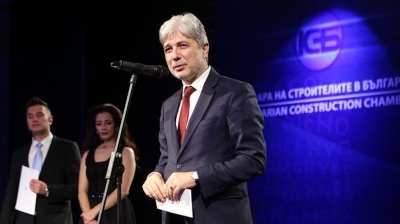 Environment Minister Neno Dimov presenting the awards at the Annual Ball of the Construction Chamber in Bulgaria.
By Denitsa Koseva in Sofia January 9, 2020

Bulgaria’s prosecution has arrested Environment Minister Neno Dimov after summoning him for interrogation over the water crisis in the town of Pernik, public broadcaster BNT reported on January 9. Dimov is the first serving minister ever to be arrested in Bulgaria.

Documents published by independent investigative news outlet Bivol.bg show that significant quantities of water have been diverted from the Studena dam through an illegal canal. It has also published documents showing that, despite the falling level of the Studena reservoir, which has almost dried up, Dimov signed documents allowing the use of water for industrial purposes.

According to the prosecution’s spokeswoman Siyka Mileva, quoted by BNT, Dimov will spend 24 hours in custody. She did not elaborate on the reasons for his arrest.

More than 100,000 people are affected by the water crisis in Pernik, while more than 315,000 people across the country (including those in Pernik) are receiving insufficient water supplies.

Local media report that Dimov had been aware of the situation since the summer of 2019, but has not taken any measures to limit the use of water from the Studena reservoir in order to avoid the current crisis.

Prior to bringing Dimov in for interrogation, the special prosecution raided the offices of the environment ministry, reportedly seeking to obtain information related to the Studena reservoir.

In addition to the ministry, prosecutors have also raided the offices of the company managing Pernik’s water supply utility and Pernik’s municipal council.

In December, the Pernik district prosecutor Krassimira Mircheva accused Dimov and the Regional Development Minister Petya Avramova of being responsible for the situation with the Studena dam. However, a few days later, chief prosecutor Ivan Geshev announced there was no evidence at the time that they were responsible.

Dimov said he was not arrested but is helping the prosecution, according to BNT.

Following the news of his interrogation, Prime Minister Boyko Borissov was quoted as indicating that Dimov might be dismissed. This is the latest of a series of scandals to hit Borissov’s government.

Dimov has been environment minister since the beginning of the mandate of Boyko Borissov’s third government. He was proposed by one of the ruling Gerb party’s junior coalition partners, the far-right VMRO party.

He has already been involved in several environmental scandals, including an attempt to amend legislation that would allow the expansion of the Bansko ski resort, located in Pirin National Park. At the time, the coalition For the Nature comprising 23 environmentalist organisations called for his resignation.

He was linked to the lack of measures against the air pollution in Bulgaria, which led to a claim filed against Bulgaria by the European Commission, as well as an attempt to amend the Natura 2,000 ecological network to allow construction in protected areas.