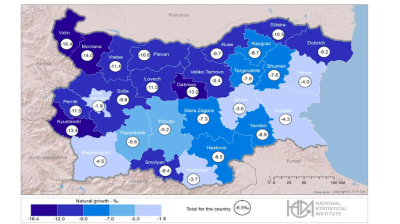 Data from Bulgaria's National Statistical Institute shows a population decline in all regions across the country in 2018.
By bne IntelliNews April 14, 2019

Bulgaria is forecast to experience one of the world’s sharpest population declines during the rest of this century, according to long-term UN projections. Along with other eastern EU member states, the country is already experiencing skills shortages, due to the natural decline of the population and high emigration, mainly to fellow EU countries.

The data also revealed continued ageing of the Bulgarian population. At the end of last year the people aged 65 and over made up 21.3% of the country’s population, up by 0.3 percentage points compared to a year earlier.

This is above the EU average of EU-28 is 19.7%; Bulgaria is among eight EU member states where the share of the elderly among the population is above 20.0%.

In terms of migration, Bulgaria experienced net emigration of around 4,000 people, and almost half of the 33,225 people who changed their address in Bulgaria for an address abroad were aged 20 to 39 years.

The population decline was evident across the country. The lowest decline was in the Sofia (stolitsa) (-1.9%) and Sliven (-3.6%) districts, where numbers were down by 1.9% and 3.6% respectively. At the other end of the scale, the sharpest population decrease was in the Vidin district (16.4%), followed by Montana (14.0% and Kyustendil (13.4%.

Mongolia’s inflation rate reaches 6.2% in May