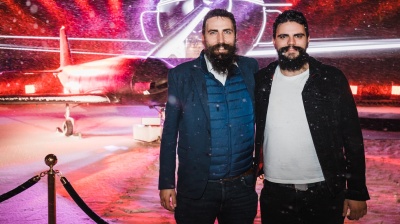 Dronamics founders Svilen and Konstantin Rangelov at the launch of the Black Swan in Sofia. / Dronamics
By Denitsa Koseva in Sofia December 9, 2021

Bulgarian company Dronamics, which produces and operates middle-mile cargo drones, unveiled on December 9 its Black Swan unmanned aircraft, saying it will bring a new era for the global freight industry.

Dronamics’ Black Swan falls into the latter category, with its ability to carry up to 350 kg of cargo at a distance of up to 2,500 km at a cost up to 80% lower than any existing aircraft.

“Seven years ago, two brothers — Svilen and Konstantin Rangelov, an economist and an aerospace engineer — started with the crazy idea of building a large unmanned drone that can carry up to 350 kg of cargo at a distance of up to 2,500 km at up to 80% lower cost than any aircraft in existence. Last night, in a dramatic outdoor presentation during a snowstorm at Sofia Airport, the two brothers unveiled their first production unit of the Black Swan aircraft that is ready to start commercial flights for same-day delivery service in Europe early next year,” Dronamics said in a press release emailed to bne IntelliNews.

The Black Swan is a fixed-wing aircraft that can operate from runways as short as 400 meters, unpaved, and will enable Dronamics to serve customers in small and remote communities. The Black Swan can run on 100% synthetic fuel.

“The unveiling of the Black Swan represents a critical milestone in the company’s mission to enable same-day shipping for everyone everywhere. The years of hard work are paying off and as soon as we’re done with our extensive test program and obtain certification in 2022 we are going to begin commercial operations, serving customers in Europe and beyond years ahead of everyone else,” the company’s co-founder and CEO Svilen Rangelov said in the press release.

Management consultancy Roland Berger estimates the size of the global market for non-military drones at $5.5bn. It notes that despite the hype around future flying taxis, “it’s in the rather less glamorous logistics sector where real, practical progress is being made in the use of unmanned aerial vehicles (UAVs). Unlike flying taxis, cargo drones are a proven technology – they can now drop online shopping deliveries in back yards, deliver vital medicines to otherwise inaccessible locations and zip around warehouses delivering parts at the precise moment they’re needed.”

While drone delivery is at an early stage, several governments have already issued permits to companies to trial commercial cargo drones, and in 2019 Wing was given a permit to carry out commercial deliveries using cargo drone in the US, while Amazon is developing its Prime Air small drone service.

In the segment targeted by Dronamics, "High capacity and long-range deliveries via cargo drones are becoming increasingly feasible,” according to a comment by Roland Berger. “Instead of bundling goods in trucks or trains according to a fixed schedule, cargo drones can transport fewer items more often with more flexibility. Despite the vast investments required to build UAVs of this scale, several established and new market players are racing to become operational.”

There are also potential environmental gains, as a study by communications firm Inmarsat and Cranfield University published this autumn found that switching to UAVs can cut carbon dioxide emissions from deliveries by up to 48%.