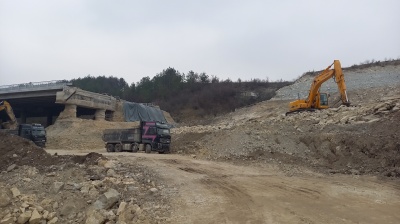 Around BGN60mn (€30.7mn) paid in advance for the construction of Lot 5 of Bulgaria’s Hemus motorway was transferred to shell companies and then exported from the country in bags and sacks, caretaker Interior Minister Boyko Rashkov said on November 5.

A day earlier, the arrest of more than 10 people suspected of involvement in stealing money paid in advance for the construction of the motorway was announced.

According to Petar Todorov, secretary of the interior ministry, the money was transferred to shell companies registered just days before the money was paid. Their owners were the subjects of criminal files, and signed letters of attorney at a cafe. Other people then withdrew the money in cash, taking BGN1mn at a time.

All the shell companies had capital of BGN2 and were officially owned by people with no assets and with criminal files. They had no equipment or personnel. Some employees had been appointed a few days before the money transfers, and then dismissed and appointed to another shell company. The companies had no revenue other than the sums transferred for the construction of the Hemus motorway stretch.

BGN84mn was paid in advance to the company Vodno Stroitelstvo-Blagoevgrad under a contract signed with the state-owned company Avtomagistrali. Radio Free Europe has reported that, according to its unofficial information, the company’s owner, Viktor Velev, was among those arrested.

Todorov also said that the authorities had information on November 3 that the participants in the scheme were preparing to destroy documents proving the criminal activity so the police decided to quickly arrest them.

The BGN84mn was paid by Avtomagistrali at a time when even the route of the Lot 5 stretch had not been decided, caretaker Deputy Regional Development Minister Ivan Shishkov said. The government only decided to initiate the procedure to select the route in the last few days, but the money was paid in 2020.

Another section of the motorway – Lot 4 – also did not have the proper documents allowing the start of its construction. However, Avtomagistrali paid for that section in advance as well, the head of the state construction supervision Vladi Kalinov said.

At the end of October, the interior ministry, the National Revenue Agency and the Agency for State Financial Inspection raided the offices of Avtomagistrali, seizing documents and computers related to the Hemus motorway construction.

On October 4, Rashkov accused former prime minister Boyko Borissov of being involved in the theft of money paid for the construction of Hemus motorway. Rashkov said the funds were transferred via a bank (still unnamed) whose owner had joint ownership in companies with Borissov.

Local media have suggested that Rashkov was referring to Tsvetelina Borislavova, owner and chairman of the board of the Bulgarian-American Credit Bank. Borislavova was allegedly in a relationship with Borissov in the past. However, there has been no confirmation of these suggestions so far. Borissov has denied Rashkov’s claims, threatening to sue him.

The Hemus motorway's construction — one of the top priorities of Borissov's three governments — has been marred by controversy and accusations of corruption for years.

When completed, the motorway will connect the capital Sofia to the Black Sea city of Varna, a distance of 420 km. Construction of the first section started back in 1974, but work stalled in the final years of the communist era, only to resume in the late 1990s. By the time Bulgaria joined the EU in 2007, just 170 km of the motorway had been built. After that, progress continued to be patchy as several tenders for various stretches were cancelled either by the government or by the courts following objections from failed bidders.

Rumours of corruption in the construction process have also been circulating for some years. Back in January, Hristo Ivanov, one of the leaders of Democratic Bulgaria, said his formation would inform the European Commission about large-scale corruption related to the construction of Hemus, estimated at €2.6bn.

However, it was only when the first caretaker government under Prime Minister Stefan Yanev took office that action was taken; his government launched in-depth investigations into numerous cases of suspected corruption, including the construction of Hemus.

In June, Minister of Regional Development and Public Works Violeta Komitova revealed that in-house procedures for granting contracts worth millions were used for the strengthening of 84 landslide defences and for the construction of the Hemus motorway.

Her ministry said at the time that Avtomagistrali had paid more than BGN180mn to subcontractors in advance for works that had not progressed, or did not begin at all six months after their deadlines.

According to Komitova, the previous government led by Borissov secured BGN3.71bn for the construction of the Hemus motorway. Avtomagistrali granted BGN976mn to 45-50 companies in advance for future construction works.

Some of the sections, for which advance payments were made, need to be re-designed as currently they go through landslides, protected areas and areas with construction risks.

Komitova added in September that illegal construction works were carried out on three sections of Hemus motorway as no construction permits had been issued.

BREAKING: Putin signs off annexation of four Ukrainian regions
37 minutes ago
Kremlin preparing for a protracted conflict by putting Russian economy onto a war footing
4 hours ago
Hungary’s forint slides to new low after central bank ends tightening cycle
7 hours ago
Slovak ministers criticise Czech border controls
7 hours ago
Might Trussonomics be a branch of Erdoganomics?
12 hours ago