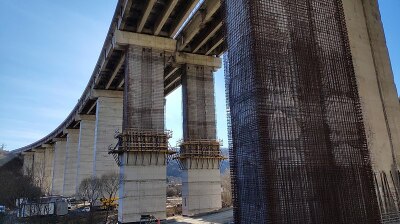 Bulgaria’s unit for the fight against organised crime, GDBOP, has arrested at least ten people on suspicion of involvement in the misuse of funds during the construction of Hemus motorway.

The Hemus motorway's construction — one of the top priorities of former prime minister Boyko Borissov's three governments — has been marred by controversy and accusations of corruption for years.

When completed, the motorway will connect the capital Sofia to the Black Sea city of Varna, a distance of 420 km. Construction of the first section started back in 1974, but work stalled in the final years of the communist era, only to resume in the late 1990s. By the time Bulgaria joined the EU in 2007, just 170 km of the motorway had been built. After that, progress continued to be patchy as several tenders for various stretches were cancelled either by the government or by the courts following objections from failed bidders.

Rumours of corruption in the construction process have also been circulating for some years. Back in January, Hristo Ivanov, one of the leaders of Democratic Bulgaria, said his formation would inform the European Commission about large-scale corruption related to the construction of Hemus, estimated at €2.6bn. However, it was only when the first caretaker government under Prime Minister Stefan Yanev took office that action was taken; his government launched in-depth investigations into numerous cases of suspected corruption, including the construction of Hemus.

The arrests were made a few days after caretaker Interior Minister Boyko Rashkov has said that money for the motorway’s construction was used to bribe voters.

A drone inspection of construction works along the motorway was carried out, but officials haven’t yet revealed whether the work was done badly or not at all.

GDBOP has not issued an official statement on the arrests and the number of people detained is unclear. Dnevnik news outlet reported late on November 3 that 10 people had been arrested, among them managers and employees of construction companies, but Radio Free Europe said later that the number was as high as 17.

According to unofficial information obtained by Radio Free Europe, among those arrested was Viktor Velev, the majority owner of Vodno Stroitelstvo - Blagoevgrad and manager of Groma Holding. The company received BGN84mn in advance for the construction of sections of the Hemus motorway, according to a report from the state audit office released in the summer.

On November 4, Rashkov said that budget funds provided for the construction of the Hemus motorway had been transferred via a bank (as yet unnamed) whose owner had joint ownership in companies with former prime minister Boyko Borissov.

Borissov immediately denied the claim and threatened to sue Rashkov unless the interior minister reveals the name of the bank and provides details proving his claim.

Rashkov has called on the prosecution to arrest the owners of the construction companies responsible for the siphoning off of funds, warning that the state will have to pay for the construction of the same sections twice after the sums previously paid went missing.

“One of the famous road constructors has transferred BGN21mn (€10.7mn) to the UAE,” Rashkov said, but gave no details, saying he will divulge more detailed information in the coming days.

At the end of October, the interior ministry, the National Revenue Agency and the Agency for State Financial Inspection raided the offices of state-owned company Avtomagistrali, seizing documents and computers related to the Hemus motorway construction.

Back in June, Minister of Regional Development and Public Works Violeta Komitova revealed that in-house procedures for granting contracts worth millions were used for the strengthening of 84 landslide defences and for the construction of the Hemus motorway.

Her ministry said at the time that Avtomagistrali had paid more than BGN180mn to subcontractors in advance for works that had not progressed, or did not begin at all six months after their deadlines.

According to Komitova, the previous government led by Borissov secured BGN3.71bn for the construction of the Hemus motorway. Avtomagistrali granted BGN976mn to 45-50 companies in advance for future construction works.

Some of the sections, for which advance payments were made, need to be re-designed as currently they go through landslides, protected areas and areas with construction risks.

Komitova added in September that illegal construction works were carried out on three sections of Hemus motorway as no construction permits had been issued.