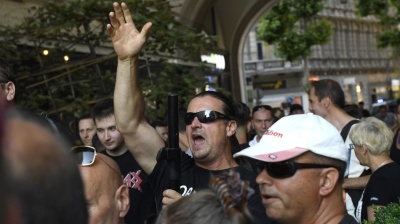 Far-right activists organised a counterdemonstration demanding a ban of the gay parade. For the first time, it was demonstrators who were sealed off by police by cordons. The march ended without any incidents.

Radical right-wing demonstrators disrupted the marches held in 2007 and 2008, casting uncertainty over the future of the event. Since then the incumbent governments stepped up security and only minor incidents occurred in the last 12 years.

Attitudes are gradually changing in Hungary and other Central European countries, though LGBT and alternative lifestyles in general remain a difficult subject for many people of the whole former socialist bloc.

Before the start of the march, oganised by the Rainbow Mission Foundation, spokesperson Kama Peksa said LGBTQ people had had enough of being treated as second-class citizens by those in power.

According to press reports the conservative government of Viktor Orban plans to amend the constitution in September to prohibit LGBTQ people from adopting.

Peksa stressed that LGBTQ people would not give up their fight, rather their solidarity would grow as pressure from the established powers increases.

Poet and writer Orsolya Karafiah, who was the MC for this year’s event, said it would be good if the country was at least as open as the crowd gathered in Kossuth Square, unafraid and standing up for dignity and diversity.

While the speakers addressed the crowd, marchers held a "kiss flash mob" to mark International Kissing Day. On their way to March 15th Square, the marchers waved rainbow flags, sang songs and danced. After the march Peksa said this year’s event was the most peaceful and unhindered one in recent years. She noted that the participants marched without cordons this year, and in spite of that there were no disruptions.

MTI’s correspondents saw the flags and banners of the opposition Democratic Coalition (DK) and the Socialists (MSZP) as well as the Liberal Party among the marchers. The organisers also said the march was supported by Momentum, Parbeszed, and the satirical Two-tailed Dog party.

The US embassy and 32 other countries issued a joint statement in support of Budapest Pride.