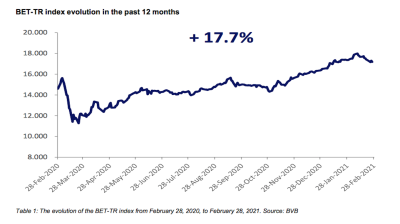 The Bucharest Stock Exchange's BET-TR index went up by 17.7% y/y as of the end of February.
By Iulian Ernst in Bucharest March 9, 2021

The BET-TR index of the Bucharest Stock Exchange (BVB), which follows the share price movement paid by the companies included in the main BET index and their dividends, went up by 17.7% y/y as of the end of February, the BVB announced in a statement. Nearly a quarter of this growth, namely over 4pp, was achieved during the first two months this year.

Furthermore, the total value of transactions exceeded RON2.4bn (€500mn) in the first two months — taking into account the two markets that boasted significant increases each: 16% for the regulated market and 340% for the AeRO market.

There is an increased interest in the so-called growth companies listed on the alternative AeRO segment of the BVB, but also for the companies with a solid track record listed on the regulated market, said Radu Hanga, president of the Bucharest Stock Exchange.

"As of March, the international investors following the FTSE Russell indices have access to four Romanian companies: Banca Transilvania and Nuclearelectrica in All-Cap indices, Bittnet and TeraPlast in Micro Cap indices. This list will likely include at least one more company in the 2021 FTSE Russell assessments," said BVB CEO Adrian Tanase.

The investment activity at BVB continues its upward trend in the first part of 2021, after the record results obtained in 2020 when the investors active on the Bucharest Stock Exchange traded financial instruments totalling RON18.3bn (€3.8bn). It was the highest annual value ever recorded on the Romanian stock market's main segment and exceeded  the 2007 record by almost 25%.

Three new stocks and two bond issues have already been listed on the BVB this year and around 20 other such events should take place by the end of the year, according to Stefan Muscociu, BVB business development and marketing specialist.

"Now we see the results of the work in previous years. … Companies are currently in various stages of listing on a case-by-case basis. In 2019 and 2020, we went with the engines running at full speed. We had almost 40 bond issues and four companies listed," said Musgociu quoted by Economica.net.

He anticipates that the activity on the AeRO market, which is dedicated to smaller companies, will be better in 2021 compared to previous years.

Until less than half a year ago, investors perceived the companies listed on AeRO as low liquidity, but the pandemic crisis changed the situation, according to Musgociu.

Until recently, the few relevant companies on the AeRO market were Bittnet Systems, Life is Hard and Transilvania Broker, the rest of the companies being considered too small and risky.

However, in the last 12 months, entrepreneurial companies that investors considered very attractive were listed, such as Norofert, 2Performant Network, Safetech Innovations, Agroland and MAM Bricolaj. The AeRO market remained very active at the beginning of 2021. The strong increases recorded by some of these companies in the last two months have raised the investors' interest, explained the BVB official.