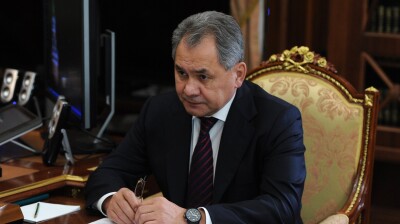 Russia’s Defence Minister Sergei Shoigu says the military exercises along Ukraine’s border have been completed and has ordered all the troops back to barracks starting on April 23 and being completed by May, Tass reported on April 22.

Fears of an imminent invasion have been stoked by the large build-up of Russian forces on Ukraine’s eastern border and additional forces sent to Crimea.

Ukrainian President Volodymyr Zelenskiy welcomed the announcement and thanked his international partners for their support.

“The reduction of troops on our border proportionally reduces tension. Ukraine is always vigilant, yet welcomes any steps to decrease the military presence & de-escalate the situation in Donbas. Ukraine seeks peace. Grateful to international partners for their support,” Zelenskiy said on his official twitter account.

The estimates of the number of troops vary from around 40,000 new troops largely stationed in the city of Voronezh some 130 km from Ukraine’s border to the EU’s higher estimate of 100,000 troops, which seems also to count the troops permanently stationed in Crimea since before the annexation in 2014, as well as the Moscow-backed separatist fighters in Donbas, but analysts agree that the build-up is the largest since 2014.

However, analysts were in agreement that the troop movements were a bit of geopolitical theatre designed to put pressure on Kyiv and at the same time send a very strong signal to Washington that Russia could, and would, cause a lot of trouble if more debilitating sanctions were to be imposed on it.

Shoigu went with the “exercises” story and announced that they are now complete and has decided end the “verification activities” in the Southern and Western Military Districts “because all the goals set have been achieved.”

"I believe that the objectives of the surprise check have been fully achieved. The troops have demonstrated the ability to ensure reliable defence of the country," Shoigu said on April 22 in Crimea at a meeting on the results of the actions of the Southern Military District and the Airborne Forces during surprise checks as cited by Tass.

Shoigu said: "to the General Staff, the commanders of the military districts and the airborne troops [have kept] to plan and [will] start from April 23 the return of troops to their permanent deployment points, conduct a detailed analysis and summarise the results of a surprise check of the troops."

Shoigu said the withdrawal should be completed by the May 1 holidays. "By May 1, 2021, the personnel of the 58th Army of the Southern Military District, the 41st Army of the Central Military District, the 7th, 76th Airborne Assault and 98th Airborne Divisions of the airborne troops [will have returned] to their permanent deployment points,” Shoigu said.

Equipment of the 41st army will remain close to the border “in case something happens” until the Zapod 2021 annual large-scale military exercises that are slated to happen in September, like every year. Also the 56 VDV brigade will stay in Crimea to reform itself into a regiment based in Crimea, according to other Russian reports.

Shoigu confirmed that equipment and weapons of the 41st Combined Arms Army, which are planned to be used in the Zapad-2021 strategic exercises, would be placed in field parks at the Pogonovo training ground, and their maintenance and reliable protection would be organised.

The Zapod exercise (Zapod is Russian for “west”) are an annual military exercise where Russia practises defending itself from attack from the West and involves mobilising all the three main battle groups along its entire western border.

The exercises are the source of annual tensions as Russia shows off its military might along its border with NATO.

The pull-back can be taken as a signal from the Kremlin that it is ready to move to the next stage of potential talks with the White House. Russian President Vladimir Putin and US President Joe Biden are both scheduled to participate in a virtual climate summit called for by Biden this week.

The Kremlin has tentatively said Putin is willing to participate in a one-on-one summit with Biden in the near future, despite the new round of sanctions imposed by the US on April 15.

In what may be another olive branch, Putin held a phone call with Minister President of Germany's federal state of Saxony Michael Kretschmer and said Russia was willing to co-operate with Germany on the supply of the Sputnik V vaccine.

"The prospects for the development of Russian-German relations, in which interregional ties play an important role, were discussed," the Kremlin said in a press release. Germany is desperately short of enough vaccine to begin its mass inoculation programme and has been discussing the possibility of buying and making Sputnik V to alleviate a growing scandal at its mishandling of the vaccine roll-out.

"At the request of Michael Kretschmer, the Russian president briefed him on Russia’s approach to resolving the intra-Ukrainian crisis. The issue of [blogger] Alexey Navalny [convicted in Russia] was raised too,” the Kremlin said.

Finally, the Kremlin probably made a climbdown more palatable after police were ordered to stand by and do nothing during mass protests the day before, called for by Team Navalny. Moscow saw a total of 30 arrests and no violence, whereas the previous demonstrations on January 23  and January 31 were both violent and bloody.