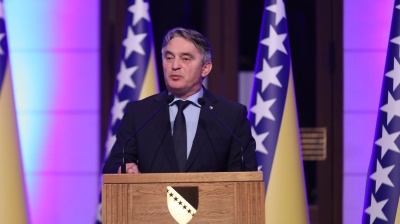 The Chairman of the Presidency of Bosnia & Herzegovina, Zeljko Komsic, said the Russian ambassador's comments were "unacceptable". / Bosnian Presidency
By bne IntelliNews March 18, 2022

Russia is fiercely resistant to countries that it considers to be in its sphere of influence joining the western military alliance. It launched the invasion of Ukraine after failing to secure a commitment that Ukraine would never join; now among the points being discussed for a potential peace deal are that Ukraine would agree to neutrality and rescind its aspirations to join Nato.

Speaking to FTV television Kalabukhov said that Bosnia has the right to decide whether or not to join Nato, but that Moscow also reserves the right to “respond to such a possibility in accordance with its interests”.

“If [Bosnia] decides to be a member of any alliance, that is an internal matter. Our response is a different matter. Ukraine's example shows what we expect. Should there be any threat, we will respond,” Kalabukhov told FTV, Hina reported.

He argued that it is the West that poses a threat to Bosnia’s security by claiming that Russia is “allegedly preparing a plan”. “We do not have any plans. We will respond having analysed the strategic and geopolitical situation”, the ambassador said, adding that Bosnia’s membership in Nato was now a reality anyway because of the lack of consensus on the matter in the country.

The Fena news agency also reported the position of another member of the Bosnian Presidency, Sefik Dzaferovic, who said that the statement from the Russian ambassador represents an inadmissible threat and attack on the sovereignty of Bosnia.

“Bosnia & Herzegovina is a sovereign state that will make decisions about its own future independently, based on its constitution and law, taking into account the will and interests of its citizens, not other people's interests. Russia cannot appropriate the right to decide on the future of Bosnia and Herzegovina. Bosnia and Herzegovina will not be governed by the Russian Embassy,” he said.

The third member of the presidency, Bosnian Serb leader Milorad Dodik, has not yet condemned the comment.

In the interview, Kalabukhov dismissed claims that his country was destabilising Bosnia with the help of Dodik, describing them as “lies and nonsense”. MEPs recently urged Dodik to cut ties with Moscow.

The US embassy in Bosnia also condemned Kalabukhov’s statement. “The latest threats by the Russian ambassador to Bosnia and Herzegovina are dangerous, irresponsible and unacceptable. No third party has the right to vote in security arrangements between Nato and sovereign countries,” the embassy said on its Twitter account. “We will continue to stand firmly with Bosnia and Herzegovina as it takes the necessary steps to secure its place in the Euro-Atlantic community of nations,” the tweet reads.

Bosnia is an aspiring Nato member that was invited to join the MAP in 2010. At the beginning of 2021, Sarajevo set up the Commission for Cooperation with Nato whose task included facilitating the development of the Reform Programme for 2021-2022. However, disagreements among politicians have stalled its progress towards accession.