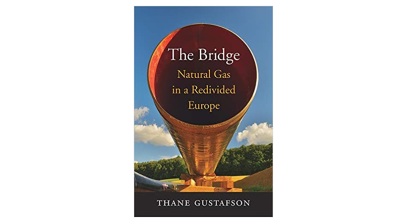 "The Bridge: Natural Gas in a Redivided Europe" by Thane Gustafson digs into the details of Europe's relations with Russian gas
By Jason Corcoran in Moscow November 21, 2019

There’s a lot to swallow when you consider the enigma as to why German political and public opinion is in favour of the Kremlin’s controversial Nord Stream-2 gas pipeline. Of course, there is Russia's geopolitical aggression, the sanctions quagmire, Ukraine’s vital role as a transit nation, the rise of renewable energy and the poor personal rapport between Vladimir Putin and Angela Merkel.

A new book by Thane Gustafson, a Professor of Government at Georgetown University in the US, goes a long way into explaining why Germany has always put commercial interests ahead of all of those issues when dealing with big, bad Gazprom. His new tome 'The Bridge: Natural Gas in a Redivided Europe' sets out the genesis of Russia's gas contract with Germany- and the West - and how it yet may be blown-up by increasing geopolitical tensions.

Gustafson suggests that this puzzle can perhaps be explained because the political and business sides of the relationship have been in the hands of separate communities and have been handled by different rules.

“Germany has sought to keep business and politics distinct by insisting on the private sector nature of the project and on Germany’s prerogative to make key business decisions on a bilateral basis,” he writes.

In his introduction, Gustafson sets out the competing Russian and Western narrative about gas. The Western narrative focuses on Europe’s perceived unhealthy dependence on Russian gas and the Kremlin’s manipulation of gas for political purposes. But in the Russian narrative, the source of conflict is the aggressive eastward spread of EU law and regulation motivated by Russophobia – in disregard of commercial precedent and economic reality.

These two narratives are perfectly personified by the current spat over the construction of Nord Stream 2, the Gazprom-led 230km (765 mile) pipeline from Russia to Germany. The US, Ukraine and several Eastern  European, Nordic and Baltic countries say the pipeline will increase Europe’s reliance on Russian gas whereas Russia and Germany claim it is purely a commercial operation.

Nord Stream 2 is arguably one of the most contentious energy projects under development anywhere in the world. Denmark recently granted the last necessary permit to start construction activities and many analysts now agree that the project's completion is only a matter of time. The grudging acceptance of the pipeline by the European Union is an acknowledgement that European production is sliding dramatically due to the depletion of old gas fields. Germany, which intends to close its nuclear and coal power plants by 2022 and 2038 respectively, need a steady supply of cheap natural gas until renewables can fill the gap. While there is plenty of LNG import capacity available across Europe, cheap piped Russian gas remains the most valid economic choice for businesses.

Put simply, about 150 billion cubic metres (bcm) of natural gas is required to fill Europe's demand gap until 2025 and Russia is the only producer with the necessary capacity to become a swing producer. In short to mid-term, Ukraine's infrastructure remains vital for Moscow's desire to boost exports to Europe and strengthen its position as a strategic energy supplier.

Gustafson, who is also an executive director of data company IHS Markit, is on somewhat familiar territory. He previously wrote The Wheel of Fortune – a book considered by some as the bible on the history of Russian oil - which explored the massive market for Russian oil, as well as the country’s economic and political dependence on the industry.

To try to fathom today’s Russia-European gas relationship, Gustafson drills into the roots of the gas revolution, which originated in Europe quiet independently of Russia and are only remotely related to geopolitics. In light of the furore surrounding Nord Stream-2, it’s fascinating to learn it was West Germany – and not East Germany – which signed the first gas export contract with the Soviet Union in 1970. The terms of the cornerstone deal, which represented a coup for then Chancellor Willy Brandt and his Ostpolitik [The Eastern policy], were very favourable for the Soviets but also contributed significantly to an improvement in German-Soviet relations.

Gustafson traces the rise of natural gas from the end of the 1950s, when only a handful of places in the Netherlands – where convenient local sources of gas existed – were connected to nearby towns. He unearths a very interesting factoid that it was a plant in Moscow that started the first only functioning methane liquefaction and storage plant in the world in 1947. Unfortunately, he doesn’t mention any other details about the facility and why Russia neglected to pursue its 50-year head-start in LNG!

The book’s pivot to cover the rise of Gas in the North Sea and how it affected the fortunes of Norway and the UK is interesting enough but it feels like a separate book – and a timely one given how the author outlines how the Scandinavians twice voted to opt out of the EU in a bid to save their sovereignty and to retain control of their natural resources. The comparison between the Norwegian energy model and the USSR’s also seems extraneous and not hugely instructive.

To this reader, it appears that Gustafson’s earlier book on Russia oil had much more primary research based on his personal interviews with key government and industry players from Yukos and Lukoil whereas this tome relies on cuttings from the Russian and German press.

The book also surprisingly doesn’t tease out the vital relationship between Putin and Gerhard Schroeder, who shocked many Germans by shepherding through the first Nord Stream in his final months as Chancellor. Shortly after leaving office, Schroeder became chairman of Nord Stream and was subsequently appointed chairman of Rosneft in 2017. Some analysts have suggested the Putin, a former KGB officer in Dresden, turned Schroeder by using spycraft and his personal charm.

The book is on much firmer ground tracing the roles of key Russian and German figures in creating this energy bridge, from Stalin’s oil Minister Nikolai Baibakov to Aleksey Kortunov, the “architect of the gas bridge”, down to Gazprom’s Alexander Medvedev and Novatek’s Leonid Mikhelson, and from Burckhard Bergmann at Ruhrgas to Herbert Detharding at Wintershall. For instance, Gustafson outlines how Detharding made it his mission in the 1990s to building a solid friendship with Gazprom's leaders – as well as a business partnership. To that extent, Detharding even took holidays with his Gazprom counterpart Victor Chernomyrdin as the built up their Wingas joint venture, a vital player for creating a competitive market for Russian gas in Germany.

Gustafson is also excellent on the “Sovetskii Monstr” Gazprom – its emergence from central planning to become a weapon of foreign policy - and the obdurate efforts by Kortunov to prevent it from being broken up.

Gustafson says the East-West gas bridge has thus far endured all manner of challenges as Russia approaches the third decade of the twenty-first century exporting gas in record volumes. Unlike the situation in the Cold War, when the gas bridge served as a stabilising and confidence-building function based on mutual economic interest and long acquaintance, Gustafson warns that gas trade’s present prosperity is vulnerable to increased East-West tensions, the expansion of LNG and the growth in renewables.

On the latter point, the book is some lacking in detail given how public opinion in Western Europe countries – especially Germany – has shifted towards favouring renewables over gas as a virtuous fuel.

Even Russia has been awash with renewable initiatives, such as a wave of new wind farms and solar projects, over the past few years as the Kremlin finally came to realise that climate change isn’t a fad. In September, Russia finally joined the Paris climate agreement after dithering for more than three years.

Notwithstanding the growing clamour for renewables, Gustafson remains convinced that Russian natural gas – or perhaps even “carbon-neutral” synthetic gas - will survive for decades as the dominant source of energy for both the industrial and residential sector.

“The underlying driver is simplicity itself: since Russia has gas and Europe needs gas, the gas trade serves both profitably,” he says. “That was the foundation of the gas bridge in the middle of the Cold War, and it remains true in the redivided Europe of today.”

The Bridge: Natural Gas in a Redivided Europe by Thane Gustafson.

Who needs a war?
13 hours ago
Outbreak of calm grips Ukraine
14 hours ago
Primark to launch in Romania as it pursues CEE expansion
21 hours ago
All eyes fall on Nazarbayev clan’s extraordinary wealth as Kazakhstan’s Tokayev asserts authority by targeting super rich
1 day ago
UniCredit's hopes of acquiring Russia's Otkritie Bank marred by geopolitical tensions
4 days ago