BOOK REVIEW: Growing up amid political upheaval in Albania 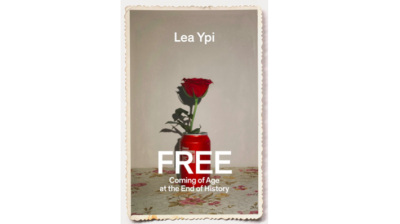 By Clare Nuttall in Glasgow December 8, 2021

“Free: Coming of Age at the End of History” is a very personal memoir of growing up in Albania in the final years of the Cold War followed by the sudden and shocking change to capitalism and a multi-party political system. Lea Ypi — now a professor of political theory at the London School of Economics — weaves in explanations of the social, political and economic upheavals among her own childhood recollections.

Growing up in the port city of Durres, Ypi was taught to love Stalin and Albania’s paranoid dictator Enver Hoxha, who died in 1985. She joined the Pioneers. She queued for hours for food and other daily necessities. At a time when there was pressure for change in the Eastern Bloc countries and the Soviet Union was experiencing glasnost and perestroika, Albania’s leaders stubbornly kept the state isolated from the rest of the world, both West and East. Ypi’s rare glimpses into life outside the country came from observing the perplexing behaviour of foreign tourists and tuning into Yugoslavian TV programmes. In this political system, secrets were kept even within the family; Ypi wonders why her parents don’t give in to her pestering for a portrait of Hoxha to be hung in their flat, and her parents and glamorous French-speaking grandmother abruptly change the subject when they realise she can overhear their coded conversations about “universities” and “studies”.

Part way though the book is the dramatic moment when the end of communism is suddenly announced and Ypi founds nothing is what it seemed. “Things were one way, and then they were another. I was someone, then I became someone else,” she wrote.

Already aware — but not understanding why — her parents had been held back by their “biographies”, she finds they are in fact from families seen as hostile to the communist regime. Her mother was from a propertied family. Her grandmother was the niece of a pasha from Salonika who became the first woman to work in the pre-communist state administration. On her father’s side, Ypi was the great-granddaughter of a former prime minister, viewed as a traitor by the communists.

The conversations in which her parents and grandmother appeared to be discussing higher education were revealed to be discussions of political prisoners; taking a degree meant serving a sentence, and the subjects of study indicated the crimes they were charged with. Perhaps most shocking to her daughter, Ypi’s mother declared that she had never supported communism, and became one of the first to join the new opposition Democratic Party, followed by her father.

The theme of freedom and what it means to be free runs throughout Ypi’s memoir. Albanians have new opportunities, to enter politics, to travel, to buy western consumer goods — at least if they can afford to. But with the turbulent freedom of the early post-communist years come job losses, poverty and new dangers.

The childhood friend Ypi used to (reluctantly) play brides and babies with disappeared from Tirana at the age of just 13, when she was one of the hundreds of thousands of Albanians who crammed onto cargo ships and sailed across the Adriatic to Italy. Worse, she was accompanied by a local 18-year old, later revealed as a trafficker. Her fate was never known.

Alongside the tragic stories are moments of high comedy too. The Coca Cola can used as a vase to hold with a single red rose as shown on the front cover of the book illustrates the time when Ypi's family got this prized western possession — a used Coca Cola can — only to have it disappear. A falling out with their close friends, suspected of stealing it, followed. Another anecdote humorously told by Ypi concerns her mother’s meeting with a delegation of French politicians, who wanted to discuss harassment. Ypi’s mother received them in a satin and lace nightdress purchased at a second-hand market — it wasn’t unusual for second-hand western nightwear to be confused with regular clothing, Ypi explained — and went on to startle her visitors by telling them: “I always carried a knife”.

The memoir culminates with a powerful description of the events of 1997 when hundreds of thousands of Albanians, including Ypi’s own family, sunk their savings into huge pyramid schemes; their collapse sparked mass riots and brought the country to the brink of civil war. She recalls crying in her room as fighting raged on the streets, and being told to stay away from the window to avoid stray kalashnikov bullets.

The book, Ypi admits, was originally intended to be a philosophical text, but instead it explores the widely different perspectives that divided her from her parents, who had hoped for decades for the end of communism in Albania, but whose “dreams became my disillusionment”. Skilfully blending the personal and the political, it tells the story of a family’s experience of transition while at the same time exposing the shortcomings of both systems.

MACRO ADVISORY: Ruble at 5-year high, how strong can it get?
3 days ago
COMMENT: Sanctions are working, but the West risks isolating Russian reformers instead of galvanising them
7 days ago
NEMETHY: Where are US markets? Where are they heading?
7 days ago
COMMENT: Constanta concerns
13 days ago
Sberbank faces a meltdown from its vast commercial real estate loan book
16 days ago