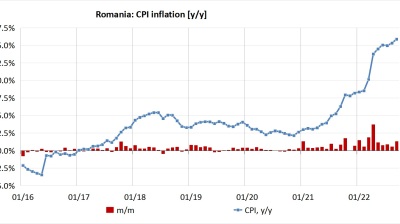 The annual inflation rate in Romania will probably stick to an upward path until towards year-end, yet at a visibly slower pace, “thus climbing above the slightly decreasing values envisaged over the short time horizon by the latest medium-term forecast”, according to the new assessment of the monetary board of the National Bank of Romania (BNR).

Romania's consumer prices rose by another 1.3% in September, reaching 15.9% y/y in the month compared to the 15.1% y/y projected by the National Bank of Romania (BNR), statistics office INS announced on October 12.

Having already moved above the central bank projection in August, inflation remained above the trajectory sketched out by BNR in its latest inflation forecast.

BNR’s August forecast had seen the annual inflation rate level off in Q3 and then embark on a gradual downward path for three quarters, but then move relatively fast afterwards, to reach 13.9% in December 2022, yet slightly below the mid-point of the target at the end of the projection horizon.

The minutes of the BNR monetary board meeting on October 5 – when a slightly above-expectations 75bp rate hike was decided – thus shows expectations for higher inflation in the coming months.

The renewed worsening of the near-term inflation outlook continued to be attributable to global supply-side shocks, board members underlined. They noted that the major drivers were the faster growth rates anticipated over the following months for the prices of natural gas and electricity – inter alia amid the changes made to the electricity price capping scheme – as well as for food prices.

BNR’s new assessments also pointed to a marked slowdown in economic growth in H2 – under the impact of the escalating war in Ukraine and the broadening of the associated sanctions –, yet after much faster-than-expected GDP growth in Q2 as well. The cyclical position of the economy was envisaged to exert modest inflationary pressures and abate in the near run, although stronger than previously anticipated.