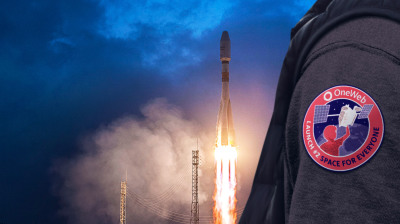 The Soyuz rocket took up 34 satellites that were dispensed into orbit in nine batches.
By Kanat Shaku in Almaty February 7, 2020

UK global communications company OneWeb early on February 7 launched 34 satellites from Baikonur Cosmodrome in Kazakhstan as part of its plan to provide high-speed internet to “everyone everywhere” worldwide.

The satellites successfully separated from the Soyuz rocket and were dispensed in nine batches over a period of several hours, OneWeb said. The British start-up is in a race with other enterprises, including companies backed by entrepreneurs Elon Musk and Jeff Bezos, to provide internet access using satellites. The company has attracted around $1.7bn from the Airbus Group, Coca-Cola, Virgin Group, Qualcomm and Softbank to deploy its satellite network.

“Importantly, today’s mission also brings us closer to our next step, realizing our ultimate vision of providing access to high speed, reliable internet to everyone, everywhere,”  CEO of OneWeb, Adrian Steckel, said following the launch. “We are seeing considerable interest from prospective customers and partners. Later this year, we will provide service in the Arctic region and 2021 will see OneWeb achieve global coverage, making the digital divide a thing of the past.”

The company plans to this year carry out eight launches at Baikonur Cosmodrome to create a global satellite network of 504 satellites in 12 orbit planes at an altitude of 1,200 km. The number of satellites is expected to eventually reach 648. Full commissioning of the satellite network, including its operation and maintenance, is expected by end-2021. OneWeb launched six satellites from the Guiana Space Centre in Kourou, French Guiana, in February last year.

The success of the project depends in large part on Russian partners after OneWeb signed an agreement with France’s Arianespace and Russian space agency Roscosmos in 2015 to launch all its satellites using Soyuz rockets, Reuters reported. Igor Komarov, the former general director of Roscosmos, claimed the contract amounted to more than $1bn. Despite becoming a key consumer in Russia’s rocket industry, OneWeb has been unable to obtain frequencies for work in Russia for more than two years, as Russia’s FSB security service considers OneWeb a threat to Russia’s national security, the news agency added.

Kazakhstan’s Prime Minister Askar Mamin on February 5 met with Steckel to discuss the project’s first phase, devised to cover the whole territory of Kazakhstan, including remote and inaccessible areas, with high-speed broadband internet via the communication satellites.

The parties are also eyeing prospects for a project to assemble satellites for OneWeb at the Spacecraft Assembly and Testing Complex at the National Space Centre in Kazakh capital Nur-Sultan. They are also looking into establishing a joint venture to deploy a gateway station in Kazakhstan for the subsequent exclusive distribution of OneWeb satellite internet to Central Asian nations, the Caucasus, Iran and Afghanistan.

The MoU was signed by Steckel and the AIFC governor, Kairat Kelimbetov, during the World Economic Forum in Davos, Switzerland, in January where they discussed how OneWeb’s support will help carry out the “Digital Kazakhstan” programme.

“Digital Kazakhstan aims to provide high-speed broadband across Kazakhstan by 2022, boosting the development of the country’s economy and improving the quality of life of Kazakhstani citizens by means of digital technologies. As a part of this effort, Digital Kazakhstan seeks to expand the country’s telecommunication networks and prioritizes providing broadband access by satellite in 6,600 rural and remote communities,” OneWeb said in a statement in late January.

OneWeb plans to engage Kazakhstan’s telecom operators among its distribution partners to provide its high-speed, low-latency ‘fibre-like’ broadband connectivity across the country’s private and public sectors, which will include civil services, businesses, schools and hospitals.

“A technical hub serving the greater Central Asia region will also be one of the projects under consideration, enabled by existing space communications infrastructure in Kazakhstan. OneWeb is considering setting up a joint venture in the jurisdiction of AIFC to operate this Central Asia technical hub,” according to OneWeb’s statement.