bneGREEN: Surging iron prices are driving up carbon costs for the producers 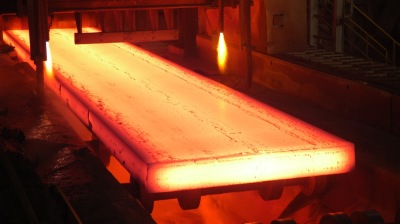 Iron prices have surged to nine-year highs in the post-COVID commodities boom but the cost of carbon have also doubled to €50 per tonne which will eat into producers profits
By bne IntelliNews June 3, 2021

Iron prices have surged to nine-year highs in the post-coronavirus (COVID-19) commodities boom that got underway at the end of last year, but that is now pushing up the cost of carbon for producers and eating into their profits.

“Carbon prices in the EU Emissions Trading Scheme (ETS) have been rising since 4Q20, but their impact on steel producers’ margins has so far been offset by exceptionally high steel prices, which we expect to moderate in 2H21,” Fitch Ratings said in a recent note.

Steel making remains very exposed to carbon costs thanks to the use of blast furnaces and basic oxygen furnaces, which represents about 60% of Europe’s production capacity.

That is carbon-intensive and so buying emission allowances has already become a significant cost for producers, reports Fitch. Every tonne of industrial carbon emissions in the EU must be covered by allowances, with about 80% of allowances currently allocated for free. Producers have to purchase allowances via the ETS to cover the remainder, Fitch reports.

As demand and production rises that has already pushed up the cost of carbon dramatically, which has doubled in the last year alone from circa €25 to €50 today.

Another factor driving up prices will be a reduction in the proportion of free carbon allowances, which started to be implemented in June and is already affecting prices. Price have also been increased by the cold weather snap that has driven up demand for power.

The share of free carbon allowances was set to decrease from the current 80% to 75% by 2025, but analysts are expecting the EU to accelerate the timetable as part of an overhaul of the ETS due this month. The EU has recently stepped up its emission reduction commitments and now aims to cut emissions by at least 55% by 2030, compared with a target of 40% previously.

Domestic steel prices have risen by 30%-60% y/y in 2021, Fitch reports, and the cost of carbon allowances has followed the cost of the metal upwards. For a company’s bottom line, the higher price of iron has largely offset the increased carbon costs and most steel companies are generating healthy profits.

Indeed, in Russia those profit are so high that the government is proposing a one-time tax payment to share the windfall with the government. Deputy Prime Minister Andrei Belousov claimed that Russian metals majors have "cheated" the state of RUB100bn ($1.4bn) worth of capital investments and state military orders in an interview to RBC business portal.

In addition to these one-off costs the marginal cost of carbon will continue to rise to €95 a tonne, according to Fitch, and will start to put pressure on steelmakers profits. For example, ArcelorMittal’s average EBITDA profitability was only about $65 a tonne over the past five years. ArcelorMittal and ThyssenKrupp reported that they have partially hedged their carbon emissions until 2030, mitigating rising carbon prices.

“The surge in carbon prices provides extra impetus to EU policymakers to introduce a carbon border adjustment mechanism to avoid carbon leakage and ease competitive pressures on domestic steelmakers,” Fitch said. “This would impose a charge on steel imports into the EU designed to offset carbon costs paid by EU producers. Further details are due to be published in June, but there has been pushback from key trading partners, including China and the US. We expect the policy will continue to face tough global political hurdles, but in the long term we expect steelmakers, consumers and the public sector to share the pressures of higher CO2 costs.” 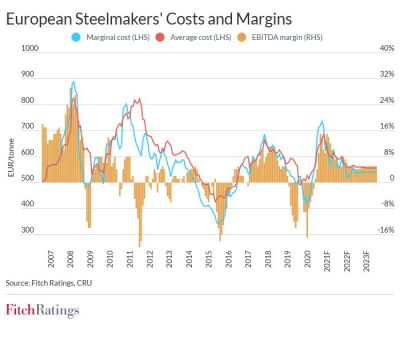 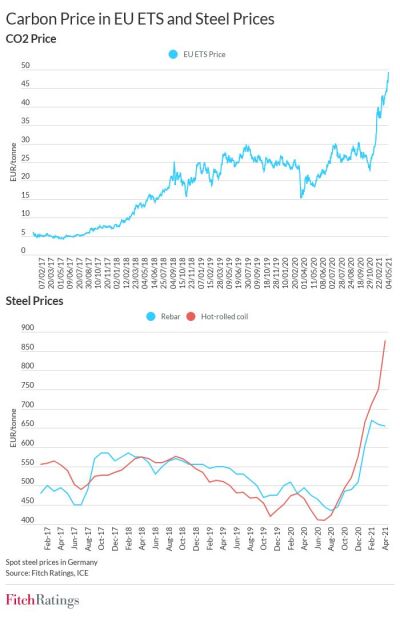 The EU on 14 July unveiled the details of its proposed Carbon Border Adjustment Mechanism, which aims to protect EU CO2 emitters from carbon leakage by making exporters to the EU market pay for the CO2 they produce.