Belarusians are striking back with satire at the repressive random arrests of pedestrians. 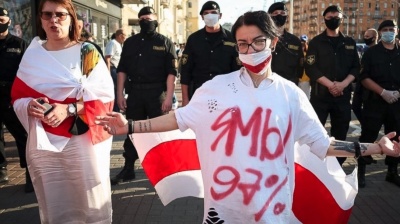 Belarusians are striking back with sarcasm at the authorities' brutal crackdown on protests by lampooning President Alexander Lukashenko
By Ben Aris in Berlin June 24, 2020

Fresh outrage followed an incident on June 23 when the police swooped on a line of shoppers queuing to get into the Symbal souvenir shop, randomly arresting people who were simply queuing up to get into the store.

The owners of the store have publically come out in support of the protests that have swept the country in the last few days and the authorities are now reportedly going to close the store down. Many shoppers had turned up to buy something in a show of solidarity with the owners and technically were doing nothing illegal. The population are having fun winding up the authorities, but the authorities have having a complete humour failure.

“Popular clothing outlet @symbalby is about to close. This company supported protesters and joked about Lukashenka. Authorities organised campaign against it, cut off electricity and sent tax officers. People gathered in solidarity with the shop, and police came right away,” tweeted Viacorka.

Following the public outcry at the arrests, local police stations have been flooded with calls by concerned citizens trying to work out what the new rules are.

“Humour and creativity are on the rise in #Belarus. People started reporting "crimes" to the police, saying that they saw lines of buyers in grocery stores, and asking whether this was an offence,” reports Hanna Liubakova, a freelance journalists who described live on the streets in Minsk with a podcast yesterday.

Other callers have run the police station to ask which stores is it illegal to shop in and what they have to do to avoid being arrested when getting their groceries, reports local outlet Nexta in videos posted online where some of the calls have been recorded.

“Another funny thing is how lots of people are now calling the police asking for instructions how to go to work or to a grocery store without being arrested,” tweeted Tadeusz Giczan, who shared an op-ed with bne IntelliNews last week on the reason for the protests.

The “criminal shopping” pranks have followed a more serious protest in the last few days where social media in Belarus has been flooded with workers in public sectors posting photos of themselves holding pieces of paper in front of their faces for anonymity that bear anti-Lukashenko slogans.

The photos are coming from all walks of life, but those posted by soldiers, policemen, security services and healthcare workers have caught the most attention. The open, albeit anonymous, rebellion by law enforcement agents suggests that Belarus President Alexander Lukashenko’s support amongst the police and arms that underpin his authority maybe starting to crumble. However, local journalists warn that none of the accounts or pictures can be verified and caution should be exercised before jumping to any conclusions.

Still, the slogans suggest the majority are posted by genuine public sector workers who have legitimate complaints. Many use the slogan: “Lukashenko, not my president.” Other use “I/We are the 97%.”

This later slogan is a play on several ideas. The first is a play on the “We are the 99%” slogan from the popular “occupy Wall Street” protests in the US a few years ago. Secondly, the 97% refers to the meme claiming that Lukashenko only commands a 3% approval rating that an opposition website found in an informal poll before it was closed down by the authorities. 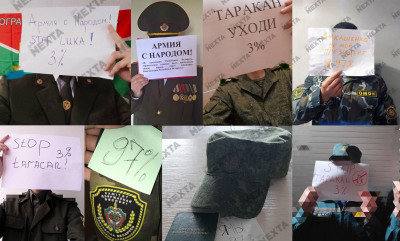 Belarusians have been amusing themselves by posting pictures and photos that lampoon Lukashenko, who has been dubbed “Sasha 3%.” The nickname is also an echo of “Misha 5%,” the nickname given to Mikhail Kasyanov when he was Russian Finance Minister. He earned his nickname for the 5% commission he purportedly charged for forewarning traders when he moved sovereign debt repayments up and down the repayment schedule, which allowed them to make money from the change in prices of the bonds. 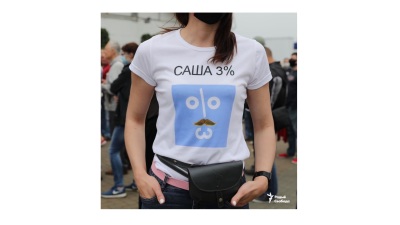 And finally the I/We (where the Cyrillic letters are intertwined) is an invention of Russia’s leading newspapers which brought out identical covers saying “I/We are Ivan Golunov”, when a journalist of that name was arrested on trumped up drug procession charges last year. In the face of the public outrage the Kremlin backed off, released Golunov and dropped the charges against him. In what has become an icon in the meantime, the I/We has been used several more times since then (and is itself an echo of France’s “Je Suis Charlie Hebdo” following a terrorist attack on the magazine of the same name). 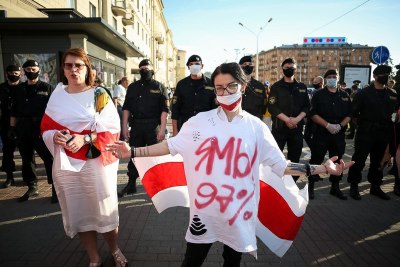 This is part of Lukashenko’s dilemma. While the state has total control over the television broadcasts, like Russia, it has no control over online content and is unable to ban content it doesn't like. Belarus remains a poor country and the population is not prone to protest despite their relative poverty compared to their neighbours both east and west, but the rise of protests in the region, driven, co-ordinated and reported in detail online, and especially on the Russian-speaking internet, the so-called RuNet, has been followed by the Belarusians and served as a guide to protesting.

And Belarusians are not losing their sense of humour despite the brutal and random arrests taking place on the streets of the capital and in regional towns.

The queues outside the Symbal store were back today as shoppers returned to buy souvenirs from the shop again in solidarity with the owners, despite yesterday’s arrests.

“Summer of solidarity. Despite yesterday's unexpected and brutal arrests, people are lining up again outside a popular Minsk-based gift shop Symbal.by. Very often in the past arrests prevented people from coming again. As you see, it's different,” Liubakova said in a tweet. 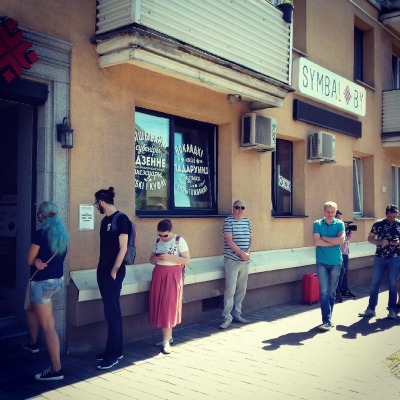