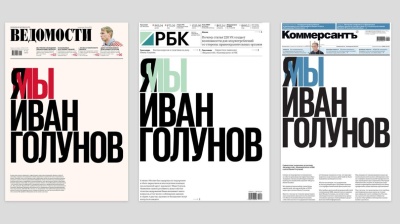 Three of Russia's leading newspapers all came out with identical front pages "I am Ivan Golunov" after the investigative reported was arrested on trumped up drug charges
By Ben Aris in Berlin June 9, 2019

Russian investigative reporter Ivan Golunov was arrested and charged with dealing drugs at the weekend in what his colleagues claim was retribution for his journalistic work that hurt business interests.

The case has rapidly escalated and lead to one of the most outspoken defiance of the Kremlin’s authority in years. Russia’s three leading newspapers -- Vedomosti, RBK and Kommersant -- all carried identical front pages on June 10, with a banner headline reading: “We are/I am Ivan Golunov.”

The unity by the newspaper is unprecedented. All of Russia’s newspapers have been cowed by the Kremlin. Vedomosti used to be jointly owned by the Financial Times, the Wall Street Journal and foreign-owned local publishing house Independent Media until a cap on foreign ownership in media of 20% forced a sale to a Kremlin-friendly publisher. Likewise the editor of RBK was also squeezed out and the paper sold, while Kommersant, like so many other papers, has been practising self-censorship and sold to Kremlin friendly buisnessmen. None of these papers have made such an outspoken stance in the past, but clearly the arrest of well respected Golunov has brought them to the point where enough is enough.

The independent pollster the Levada Center found in a survey recently that the propensity to protest amongst Russia is on the rise at the same time as people’s trust in president Vladimir Putin has fallen to its lowest point since he took office. The backlash against Golunov’s arrest is unlikely to spark a revolution, but increasingly open defiance of the Kremlin’s more ergrious abuses of power suggest the Russian people are maturing politically and that will be a big problem for the Kremlin which needs to either evolve or face some sort of revolution.

“The Kremlin presumably assumes that, like the fake party politics of the Zyuganov ‘n’ Zhirinovsky circus, this bleeds off pressure and helps maintain the status quo. But a key difference is that these protests are generated from below, not choreographed from above. Little by little, they create the organisational habits, structures and skills of protest, and also a culture of calling power to account. When an especially egregious case such as Golunov’s comes along, one that has the right characteristics — it’s in Moscow, it’s patently unfair, it’s close to the heart of the mobilising media, and it fits general assumptions about how “they” punish “us” — then not only does it push these processes forward a little, but we get to see them at work,” Mark Galleotti said in his blog “In Moscow’s Shadows.”

The case has sparked widespread outrage amongst regular Russians as well, while leading liberal figures have also come out in support.

Legendary Russian pop group Machina Veminya (Time Machine), also known as the Russian Beatles, abruptly had their concert on Red Square this weekend cancelled after their lead singer came out in support of Golunov.

Crowds several hundred strong immediately gathered outside police headquarters after news emerged of Golunov’s arrests and the accusations that police had beaten him while attempting to extract a confession.

Later the same day during his arraignment the judge ordered that Golunov be released to house arrest, an extremely unusual decision in drugs cases and likely to be the result of public pressure and the high profile nature of the case has rapidly taken on.

Gulanov still must face the charges in court, and in Russia some 99% of the cases that go to trial end in conviction.

“It’s still early to talk about this case being closed,” said Sergey Smirnov, the editor of MediaZona, a news site that covers Russia’s courts and prisons. “The police yesterday suffered a real defeat in court because house arrest is clearly a victory for the defence. But now the police will do everything they can to prevent this case from collapsing.”

Golunov has investigated state corruption and his latest articles reported on massive corruption in the funeral services business, which is worth just under $4bn a year.

Golunov wrote for Meduza, which is an opposition themed publication based in the Baltics but staffed largely by Russians. It released all of Golunov’s work and granted a creative commons copyright license on June 9, which allows any publication to republish his articles for free in an effort to highlight his case.

“Meduza’s editorial board as well as representatives of the Russian and international journalism communities believe that Ivan is being persecuted due to his investigative work. The pieces Ivan researched and wrote for Meduza contain information that is highly significant for contemporary Russian society, and the individuals he wrote about may have been involved in his persecution. Therefore, we are opening access to Ivan’s work under the Creative Commons CC BY-SA 4.0 license. This means you may reprint the stories here in your own publication, on your own website, on your own blog, or on any other platform without requesting our permission. Just indicate that they were written by Ivan Golunov, a correspondent for Meduza’s Department of Investigative Reporting, and include the names of their translators and co-authors, which are listed at the end of each piece,” the editorial board said in a statement.

Before joining Meduza, Golunov was a correspondent for Slon.ru (now Republic), Forbes, Vedomosti, RBC, and the television channel Dozhd. Golunov specialises in corruption investigations. He has worked at Meduza since 2016 and written more than 100 investigations, articles, and news briefs.