Belarusian reforms: a new liberal paradigm or business as usual? 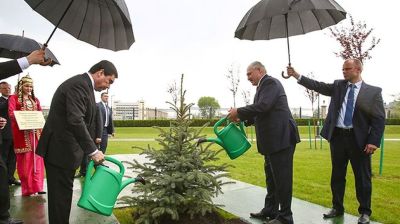 Belarus has launched a mini-revolution that could mark a “paradigm shift” in its development, some analysts believe. If implemented, the government’s new comprehensive five-year programme could transform the way the country is run, but the jury is still out on whether the state will rise to the challenge.

Belarus’ economy has been battered by the spillover effects from Russia’s economic woes and is deep in recession. More problematic is that cash-strapped Moscow is less able to bail out its neighbour country any more, while Belarus has made matters worse by managing to get itself embroiled in a nasty spat over gas prices with Russia. With some $2bn of external debt coming due in the next year, the government in Minsk is starting to look a little desperate. It has even re-opened the long-running talks with the International Monetary Fund (IMF) on a stand-by programme, during the upcoming annual meeting.

“They really don’t have a choice. The combination of a recession and poor external conditions means changes have to be made,” Matthias Morgner of at Berlin Economics, one of the authors of a paper titled “State programmes 2016-2020: Paradigm-shift or business-as-usual?”, tells bne IntelliNews in a recent interview.

The pressure has also spurred the Belarusian government into making what could turn out to be the kind of needed deep structural reforms as part of the latest five-year plan that just came into effect; at least the raft of new laws look really good on paper. “The development and implementation of state programmes are based on a fundamentally new legislative framework. It aims to overcome the past patterns of non-transparent and excessive state support to the economy,” Berlin Economics wrote in its report. “The new legislation requires transparent competitive procedures for the allocation of state support, introduces a clearly defined scope of cases and purposes for which state support can be made available, and provides for evaluating the effectiveness of the public expenditures.”

These changes strike to the heart of the problems the country suffers with its excessively centralised and largely state-owned economy. In short, the state-owned enterprises (SOEs) are going to be cut off from their automatic state handouts and left to their own devices. Typically governments in former Soviet Union states are willing to subsidise SOEs because they employ so many people, but the new regime in Belarus will put profits and production at least on a par with employment – if the government actually follows through with the plan. And there’s the rub.

“What sounds like a true paradigm-shift, in reality requires a lot more efforts to meaningfully implement the new legislation. The institutions and functions needed for a competitive award of state support need to be separated from each other,” Morgner says. The government needs to define target indicators for state programmes in such a way that they allow for a contractual relation between the producer of services, goods, and works and the client, ie. the respective ministry. Equal access to tenders for SOEs as well as for private businesses requires a changed mindset and new formats of communication to break up past patterns where the state companies used to be the default producer of all sorts of goods and services, he explains.

And that is not going to be easy. The problem that Belarus faces is there are too many so-called “red directors” in charge of the big firms that have been there since Soviet days. As old dogs it will be very hard to teach them this new trick. At the same time, while there are a growing number of young market–oriented liberal thinkers in the Ministry of Economy, there is still a majority of old school bureaucrats in the government. The institutional inertia that will resist change is substantial.

Steps to a new economy

Still, the ideas enshrined in the new regulations represent a significant step forward, even if their implementation will be a slow process.

There are 20 programmes in all that cover all the major sectors, including education, healthcare, and culture, alongside areas of economic development like transport, energy, or the development of a digital society and economy, and others.

The biggest of all the programmes is agriculture, which accounts for two-thirds of state spending under the new plan, and is such a massive employer that it will also probably be the sector to see the least change. All the programmes together will account for just under a third of all state spending and three-quarters of regional administration spending.

If the sector can be made more efficient, then Belarus has the potential to increase its food exports to $7.5bn, Deputy Prime Minister Mikhail Rusy said in an interview on October 7. “The programme envisaged for implementation in 2016-2020 should provide us with the possibility to reach the potential of $7bn-7.5bn. We must add $2bn more over the period,” Rusy said. This goal will be met through the growth of labour productivity, cost reduction and the production of value added products, he added. 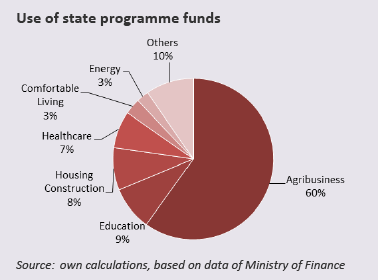 The biggest change is in who will take the responsibility for spending on the SOEs; the job of making companies profitable is being shifted from the centre to the regional administrations and the companies themselves. “State programmes are expected to be financed by a combination of budget funds, loan financing, and own contributions by the executing agencies,” Berlin Economics says. “The share of budget financing of the programmes’ total costs equals approximately 28% (central and local governments, for activities planned in 2016), loans are expected to finance about 9%, and own resources almost 63%. If the agri-business programme is excluded from the statistics, the share of budget financing of state programme’s costs rises to ca. 64%, loans shall cover nearly 11%, and the remaining ca. 25% contributed by the implementing organisations.”

For Belarus that is a revolutionary change. For at least the last decade, companies only needed to function to get cheap loans or subsidies. What is new is that the only source of funding a company can now tap is in the state programme plan. All other sources will be cut off. “State support is limited to investments in innovation, to reduce costs of production and to improve competitiveness. De-facto subsidies of energy costs, guaranteed purchases of products at fixed prices, tax exemptions and, as the most prominent example, directed and heavily subsidised lending shall no longer be permitted,” Berlin Economics says. “Also, preferential treatment of SOEs over private enterprises for the delivery of goods and services commissioned by the government is no longer required or permitted. Where public funds will be awarded to companies, this shall be done by way of public and transparent competitive procedures.”

The reformist Ministry of Economy has been put in charge of overseeing the state programmes and policing the companies to make sure they stick to their plans. The Development Bank of Belarus has been nominated as the exclusive agent to implement the tender procedures, which analysts welcome as a good solution. But the role of the line ministries will be crucial and their responsibilities still need to be clearly defined and confined to formulating policy objectives and controlling implementation, argues Berlin Economics.

However, a turf war seems inevitable – at least at the start. The new department at the economy ministry will clearly clash with the powerful red directors as well as the conservatives in the bureaucracy. Everything depends on how much steel is in President Alexander Lukashenko’s political will to see the programme through.

But there is hope. Over the last few years, Lukashenko has started to ease his iron grip on the country. In the recent parliamentary elections he allowed an opposition leader to win a seat and he defied Russia by not supporting Moscow in its clash with the West over Ukraine, preferring to stay on the sidelines. He also allied himself with Kazakh President Nursultan Nazarbayev and fellow members of the Eurasia Economic Union (EEU), who have complained to Russia about the one-sided benefits of membership.

All this has made Lukashenko more appealing to the West, which is looking to drive wedges between Russian President Vladimir Putin and his fellow eastern European allies. The upshot is that Lukashenko’s “last dictator in Europe” moniker has been dropped and both sides have started to flirt with each other; Europe has already dropped some of its longstanding sanctions on Minsk. “We are cautiously optimistic,” says Morgner. “But we will have to wait and see how far these changes get.”