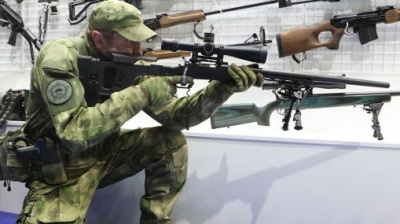 Belarusian soldier holds a Belarusian-made sniper rifle during the International Arms and Military Machinery exhibition MILEX in Minsk (2019). / https://eng.belta.by
By bne IntelliNews May 27, 2022

On Tuesday 24 May, Belarus’ Prime Minister Roman Golovchenko admitted on live TV that Belarus was selling weapons  to Russia, and that Russian and Belarusian companies are working closely to navigate around western sanctions.

Besides left-over military stocks from the Soviet times, Belarus has a sizeable military industry. While mostly prized for its good optics manufacturing, the Belarusian military-industrial complex also produces weapons and vehicles.

According to Golovchenko, demand for Belarusian weapons increased both domestically and abroad after Russia’s invasion of Ukraine.

Golovchenko also admitted that Belarus’ military-industrial complex had “very large-scale restrictions on imports” due to western sanctions. However, while its defence industries did use many western components, Golovchenko said that it was not their first year under sanctions.

Together, they have set up joint R&D projects and are evaluating the results seen in Ukraine, and Golovchenko called this a “dynamic period for Belarusian defence”.

That the Belarusian and Russian military-industrial complexes work together, and that Belarus’ military exports are mostly focused on Russia is not a secret. Both countries' defence industries have likely suffered a lot from import restrictions due to sanctions since Russia began its invasion of Ukraine. However, together they might be able to overcome their import restriction problems.

The Russian invasion of Ukraine has been a very bad showcase for Russian military equipment, strategy and tactics.

By analysing how Russian military equipment has fared against military equipment from a broad range of western countries and likely examining captured western weapons, Belarus’ and Russia’s join defence R&D projects may develop new and more effective equipment. However, we can be absolutely sure that western defence companies are doing the same.