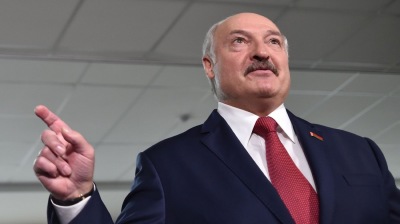 OMON riot police were back on the streets of Minsk as Lukashenko launched his counteroffensive against the protests in co-ordination with Moscow, which has launched a new more aggressive campaign against the demonstrators.
By Ben Aris in Berlin August 20, 2020

Embattled Belarusian President Alexander Lukashenko launched a counteroffensive against the opposition on August 19 in co-ordination with the Kremlin, which has also ramped up its criticism of the protests that swept Belarus in the last 48 hours following the blatantly falsified presidential elections earlier this month.

Belarus’ brutal OMON riot police were back on the streets of Minsk on August 19 as pedestrians were barred from the centre of the city. Lukashenko ordered the police to “clear the streets” at a government meeting on August 19.

“There should no longer be any disorder in Minsk of any kind,” Lukashenko said in remarks reported by state news agency Belta, announcing the new police crackdown in the capital. “People are tired. People demand peace and quiet.”

Authorities in the regional city of Grodno also did an about-face within 24 hours: for August 20, the authories had agreed to allow protests on the central squares and the authorities will assist with equipment. They said the police would apologise to detainees, who would be released. The opposition would be allowed access to TV and reports would cover the protests. Finally, workers that had gone on strike would not be punished.

By the start of August 20, central orders had clearly gone out and the local authorities reneged on all these promises. Protesters will not be provided with any assistance and all their gatherings will be considered illegal, the city administration said.

The government buildings and a theatre in Minsk that became a symbol of resistance after its entire staff quit to protest against the government were also cordoned off. Police also broke up some demonstrations being held in Minsk, but without any incident or violence.

State TV was also back in action despite a general strike by its staff. Lukashenko has reportedly flown in Russian specialists to run the broadcaster, according to some reports. Presenters pumped out a stream of critical reports of the protests and a slick campaign advert was repeatedly run which claims former English teacher and nominal victor in Belarus’ presidential election Svetlana Tikhanovskaya is an agent of the West. It ominously showed pictures of riots, fires and bombed-out buildings.

A relatively large crowd gathered in the city of Gomel carrying a giant green and red national flag in what observers believe was a genuine pro-Lukashenko demonstration. As bne IntelliNews reported, even a statistical study that showed massive falsification during the elections also showed that Lukashenko’s genuine support is non-trivial, although just how popular he is is unclear.

Lukashenko has long remained popular amongst blue collar workers who are grateful for the stability, job security and basic services his government delivered, especially in the 1990s when the rest of the Former Soviet Union (FSU) collapsed entirely.

Lukashenko held his first pro-government rally at the weekend, when some 5,000 loyal and coerced workers were bussed into the capital to attend. But the event was a PR flop and completely overshadowed by the parallel anti-government demonstration that drew a crowd of over 200,000 – the biggest demonstration in Belarus’ history.

Russian into the game

The tone has also changed in Russia, where the state-owned media has begun to aggressively attack the opposition.

“Why do people keep turning to these freaks?” asked the head of RT, Margarita Simonyan. “Tikhanovskaya has an IQ of 82. That is the same an orang-utan,” she said during a panel on state TV on August 19.

The news has also carried reports of foreign interference into Belarusian internal politics and generally ramped up its aggressive stance towards the protests.

The Russian papers, however, have continue to carry balanced reports and have been playing the story straight.

The change in mood came as Russian Foreign Minister Sergei Lavrov made some outspoken comments, accusing the international powers of interfering in Belarus. “We know what is going on. It's the same-as-usual geopolitics.” He was also soft on Lukashenko, coming close to saying he was the legitimate president, but without crossing that line. He also admitted the Belarusian presidential elections were “not ideal.”

The mood has darkened in Minsk as a sense of stalemate emerges in Belarus, Tadeusz Giczan told bne IntelliNews in a wide-raging podcast on August 19. Giezan is a Belarusian PhD candidate at University College London School of Slavonic & East European Studies and a leading source of reporting on the revolution on social media.

“The future is now not looking as bright for the protests,” Giczan said.

The authorities have been targeting workers, and over 300 employees at the Minsk Tractor (MTZ) works were sacked this week as the factory targeted the most outspoken critics of the regime. Giczan also reported that other factories' workers had simply been locked into shop floor premises “like in a concentration camp” to prevent them from walking off the job.

However, elsewhere other workers continue to join the general strike and some regional authorities have apologised for the police brutality and given protesters the right to unfettered demonstrations.

Speculation has arisen that the Kremlin is now involved in the protests and is aiding Lukashenko in a co-ordinated campaign to undermine them. A plane used by the head of the Federal Security Service (FSB), Alexander Bortnikov, arrived in Minsk on August 18 and a three-hour meeting was held with Lukashenko and the unidentified occupant of the plane, which immediately returned to Moscow.

While the contents of the discussion are unknown, the campaign against protesters in Russia has become noticeably more aggressive since, and Lukashenko also started to roll out his counter measures on the following day.

The EU held an emergency top-level session on the Belarusian situation on August 19 – it is unusual for it to hold council sessions on a single foreign policy issue – and announced new targeted sanctions on Lukashenko and his entourage as well as making the Belarusian strongman a persona non grata in the EU, but that was as far as it went.

Tikhanovskaya called on the EU in a video message ahead of its meeting for it to refuse to recognise the official results of the election but went on to say the Western powers should “respect international law, Belarusian sovereignty and the choice of the Belarusian people.” The opposition is very wary of getting dragged into the geopolitical stand-off between Moscow and Brussels and wants a free hand to negotiate with Moscow on its own terms.

The relatively limited response by the EU suggests that it took the message to heart and while it has supported the protesters and called for fresh elections in Belarus, a spokesman acknowledged that it was up to the Belarusian people to decide what to do and the EU was conscious Belarus wanted to “move closer to Moscow.” Moscow’s new more aggressive stance is likely to alienate many protesters, who up till now have been generally pro-Russian. However, it is believed the Kremlin wants to take the wind out of the protest movement’s sails and slow events down so that it can better influence them.

While Lukashenko is likely to concentrate on trying to break the strikes for the rest of this week, the Kremlin seems to have launched a disinformation campaign designed to sow the seeds of confusion and dissent to try to break the almost unanimous support for the protest movement and calls to oust Lukashenko.