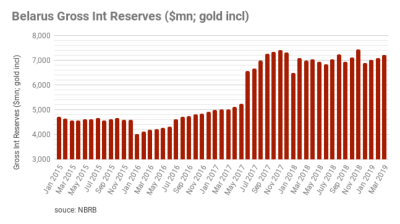 The foreign exchange reserves of Belarus increased by $150.5mn, or 2.1% month-on-month, to $7.2bn in March following a 1.1% m/m growth in February, the National Bank of Belarus (NBB) said in a statement on April 5.

The result was attributed to the purchase of foreign currency by the central bank on the Belarusian Currency Stock Exchange; the receipt of funds in foreign exchange to the budget, including export duties on oil and oil products; as well as proceeds from the sale of government bonds denominated in foreign currency.

According to the central bank's monetary policy guidelines, the volume of international reserve assets by early 2020 should be at least $7.1bn, the statement reads.

The minister also underlined that the Russia-led Eurasian Fund for Stabilisation and Development (EFSD) is considering the allocation of the seventh $200mn tranche to Minsk. In October 2018, the EFSD allocated the sixth $200mn support tranche to cash-strapped Belarus from the lender's $2bn loan agreed with Minsk in 2016.

The allocation of the tranche followed reports that Moscow intends to suspend the allocation of new tranches from $2bn support package agreed between Minsk and the EFSD, as well as suspend negotiations on a new $1bn intergovernmental loan, which could be a painful blow for the reserves.

In November, Belarus’ Finance Minister Maksim Yermolovich told journalists that Minsk should repay around $5.4bn of the state debt in 2019-2020. "Some of the $5.4bn will be refinanced. In the to-be-refinanced part $2bn will be raised as untied credit resources, which we are going to get abroad by floating the relevant bonds for a broad spectrum of investors," he said.