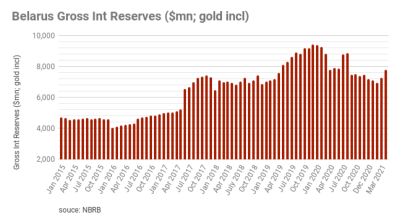 Belarus hard currency reserves fell to $7.4bn due to debt repayment and the population which is still buying more dollars than it sells. / bne IntelliNews
By bne IntelliNews July 12, 2021

Belarus' gold and foreign currency reserves fell by 4.6% to  $7,409.3bn as of 1 July 2021 according to the preliminary data, National Bank of the Republic of Belarus said on July 7 as the population bought more dollars than they sold.

The country’s reserves have been under pressure since the disputed presidential elections last August 9 lead to a massive outflow of cash from the system. Last year Belarus’ reserves fell by $1.9bn with $1.4bn of that being withdrawn in August alone.

Since then reserves have stabilised somewhat but the central bank is still seeing outflows, BelTA reports. In June 2021, the country's gold and foreign currency reserves went down by $353.8mn (by 4.6%) following the May growth of $485.2mn (6.7%).

“The decrease in the volume of the gold and foreign exchange reserves in June 2021 was mainly due to the planned repayment by the government of foreign and domestic obligations in foreign currency in the amount of over $240mn, and also due to the decrease in the cost of monetary gold,” the National Bank said.

However, the outflow of foreign exchange to the population remains significant. In January-June 2021 Belarusians bought $457.8mn worth of foreign currency more than they sold, BelTA reports.

According to the country's monetary guidelines for 2021, the international reserves could fall to $6bn on 1 January 2022.

Belarus Corruption Watch: How sanctioned Belarusian oligarch Mikalai Varabei’s family has managed to keep its real estate holdings in the EU
Lukashenko meets with Putin in Sochi
Lukashenko declares “no mobilisation” in Belarus as Minsk once again switches tactics