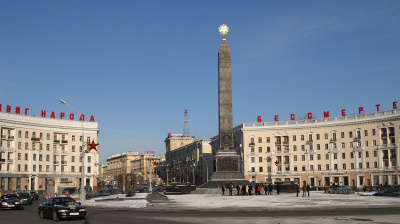 Belarus is short of money and the international capital markets are closed to it, so it is mulling forcing a restructuring on money it owes to the IFIs
By bne IntelliNews March 24, 2020

Belarus is considering restructuring some part of its external state debt and in effect defaulting on debt coming due this year, First Deputy Prime Minister of Belarus Dmitry Krutoi said on March 21, reports BelTA.

The government is discussing restructuring its debt to the international financial institutions (IFIs). Its obligations on Eurobonds will not be affected, says Krutoi.

“Those credit lines we took on standard terms… We will try to get in touch with partners regardless of quarantine restrictions and the rest in order to submit proposals on restructuring part of the external debt,” according to Krutoi. “Only credit lines from international financial organisations (the World Bank, the European Bank for Reconstruction and Development [EBRD], and the European Investment Bank) have been discussed. No default situation. We honour all our external debt commitments as usual. The matter has no relation to Eurobonds at all.”

Belarus was intending to use all foreign exchange surplus earnings from its external trade to pay down debt this year, but the situation has been deteriorating.

Moscow had promised Minsk a $600mn loan to help partially refinance debt and this money was even approved and included in last year’s Russian budget. However, the expanding row over oil duties and supplies meant the loan was never provided.

Minsk then approached China for a $500mn loan to fill the gap, but that deal too was never closed.

While Belarus has reported relatively few cases of coronavirus (COVID-19), its economy remains joined at the hip with that of Russia, which has seen a sharp slowdown and heavy devaluation of the ruble that will also hurt Minsk. Following the rout on the international capital markets that already began at the end of February the markets are effectively closed and Belarus has few ways to roll its debt over.

Now the state is planning a selective default designed to renege on those institutions that can best afford it, hoping these institution will accept the restructuring as de facto financial support.

Krutoi highlighted Belarus’ debt to the World Bank as an example, which had declared it would grant direct aid as relief from the stop shock caused by coronavirus.

“We have not asked the bank for this kind of money. But I think we could work with the bank to discuss the credit lines,” Krutoi said.

As for the IMF, Krutoi said that due to its own rules the IMF won’t re-negotiate loans or new country programmes during election campaigns, and Belarus is due to hold elections soon. “We are going to meet with IMF representatives after the election and discuss the matter,” Krutoi explained.

Minsk also plans to turn back to Moscow for help. On March 21 the government announced that a principle deal on oil supplies has been agreed with Russia, although no details were released. Krutoi has appealed for caution until a final decision is reached.

“The first quarter of the year is over now, this is why we have yet to evaluate technical capabilities of the oil refineries. Whether they will be able to process all of that or not,” he specified.

BelTA reported earlier that Russia has fully endorsed Belarus’ proposals on oil acquisition. On 21 March Belarus President Aleksandr Lukashenko hosted a government conference to discuss a number of matters relating to the acquisition of crude oil, the workload of Belarusian oil refineries, efforts to satisfy the domestic demand for oil products, and export shipments.

Chairman of the Belarusian state petrochemical concern Belneftekhim Andrei Rybakov stated after the government conference that work was in progress to put together a package of the raw materials the Belarusian oil refineries will use in the second quarter of this year.

Participants at the conference discussed various proposals from suppliers from the Russian Federation but continue to procure oil from alternative sources.

It is necessary to put together the entire raw materials package for Belarusian oil refineries within one week so that the refineries can steadily and effectively operate for the entire second quarter of the year. The refineries should have enough oil to satisfy home demand and execute foreign contracts, Lukashenko said.