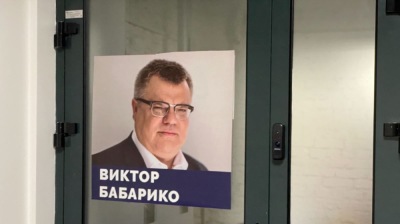 Babariko was CEO of Belgazprombank for 20 years, the country’s largest private bank and which is owned by the Russian gas monopoly Gazprom. He quit to run for the presidency earlier this year and is considered to be the front-runner in the race against incumbent Belarus President Alexander Lukashenko.

Belgazprombank was raided by police on June 12 and put under temporary administration by the central bank three days later on June 15. Most of the senior staff have been accused of money laundering and many have been detained.

Tertel was only appointed two weeks ago as part of a government reshuffle that saw Lukashenko firm up his hold on power. Tertel’s previous job was deputy head of the KGB.

The State Control Committee has released more details of the charges against Babariko.

“Currently, work is underway in a number of areas, including fraud with bills worth more than $60mn,” Tertel told journalists on June 18. “As a result, large amounts of currency were withdrawn to foreign accounts in the controlled groups by members of the criminal group. In addition, we [know] washing schemes have been established by [them, whereby] large amounts of currency were transferred to foreign banks in controlled structures."

Tertel claimed that one of the banks used by Belgazprombank to launder money was the Latvian ABLV bank that was shuttered in February after the US complained it was facilitating billions of dollars of money laundering.

“According to our Latvian colleagues, over the past few years, only in the interests of this bank, over $430mn has been withdrawn from Belgazprombank’s accounts,” Tertel said.

He expressed special gratitude to the law enforcement bodies of Latvia, who promptly responded to requests [and froze] the accounts of ABLV Bank owned by the current employees of Belgazprombank, including the deputy head of the legal department, Shevchuk. He carried out the direct instructions of Babariko, opened legal entities offshore and accompanied their activities.

Babariko has denied any wrong-doing and claims the charges against him are politically motivated. Babariko disappeared from sight on June 18 and his lawyers have been unable to obtain access to him. According to reports on a Belarusian Telegram channel that covers politics he has since been moved from holding cells in the main KGB building in Minsk to a KGB detention centre.

Tertel also said that the investigation had found the top managers of the bank had received “large bribes” for providing multi-million loans to entrepreneurs and individuals with a bad credit history and that these cases were established and documented.

"According to the facts, the Financial Investigations Department opened a number of criminal cases under Art. 243 (evasion of taxes and fees in a particularly large amount), Art. 235 (legalisation of funds obtained by criminal means), Art. 210 (theft in a particularly large amount), Art.209 (fraud), as well as Art.430 (receiving a bribe) and Art.431 (giving a bribe). We detained about 20 people directly involved in illegal activities, including Babariko,” Tertel said.

“Babariko was detained due to being the direct organiser and leader of illegal activities, trying to influence the testimonies of witnesses, attempting to hide the traces of the crimes committed and literally the other day took a large amount of money from accounts controlled by him," Tertel added.

Tertel showed the journalists documents confirming the facts of Babariko’s illegal activities, according to Tertel, who added that almost all the staff of Belgazprombank that had been detained had “co-operated with the investigation, give a confession, including [admitting to] the leading and organising role of the ex-head of Belgazprombank in these criminal schemes,” Tertel added.