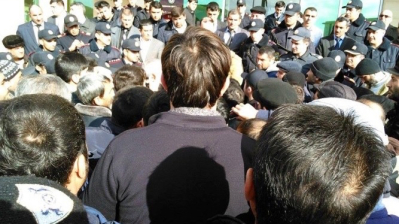 Azerbaijani citizens have taken to the streets to protest against the deteriorating socio-economic conditions in the country as prices of food and essentials soar following a nearly 50% devaluation of the manat last month.

On January 12 the opposition Musavat party led protesters in the southeastern port city of Lankaran to block the Astara-Baku road to rally against food price hikes and unemployment. "Yesterday, a 50kg bag of flour cost AZN34 (€20), today the price went up to AZN40 (€23.5)," a protester complained to Azadliq (RFE/RL Azeri Service). After negotiations with authorities, protesters agreed to unblock the road, Azadliq reported.

Lankaran used to be a fairly affluent town thanks to favourable climate and numerous agribusinesses in the area, a local resident tells bne Intellinews, but it was also very dependent on remittances from Russia. "Many men from Lankaran worked in Russia and sent money home," he said. The economic crisis in Russia and the devaluation of the ruble, however, have affected the purchasing power of the town's 220,000 residents, and the unemployment rate in the area has reached as high as 90%, according to a resident quoted by Azadliq.

Sources in Baku tell bne Intellinews that a similar protest over food price increases took place in the town of Ucar in central Azerbaijan, but authorities moved swiftly to disperse the crowd. According to Meydan TV, crowds also gathered to protest in the Siyazan and Aghjabadi regions, where three people attempted to commit suicide but were prevented by residents. That is after Alik Navruzov set himself on fire in front of the school where he worked in Neftchala region on January 7 because he could no longer afford to pay his loans.

Elsewhere, protests in the village of Nardaran, a conservative Shi'a Muslim community located 25km away from the capital city Baku, have led to violence and many arrests. The villagers have long complained about economic issues, as well as a government crackdown on their community over its conservative religious practices. After a standoff between authorities and villagers in November left six casualties, Baku has arrested dozens of people, most recently 15 people on January 11, and tensions in the village could escalate further should economic woes deepen.

This level of unrest is unusual for Azerbaijan, where the government has staged an unprecedented crackdown on dissent since the summer of 2014, jailing as many as 93 political prisoners, while forcing others into exile.

The level of panic and hardship caused by the deepening currency crisis is greater than Azerbaijan has ever experienced in the past 21 years. The December devaluation of the manat has resulted in an almost doubling in prices of some food items, according to RFE/RL. For instance, in the days following the devaluation, supermarket chain Bizim increased prices by an average of 30% on most imported products. Other shops have reportedly closed down altogether to avoid losing money.

With food prices skyrocketing, in early January Azerbaijanis turned to exchange offices to buy dollars and euros to protect their manat savings from further devaluation of the national currency. The en-masse conversion of manats into foreign currency forced the central bank to ban exchange offices operating outside of banks on January 9. On January 11, most banks reportedly stopped selling dollars to the public and imposed a 4% to 10% fee on ATM withdrawals in foreign currency, according the abc.az/Fineko website.

On January 13, the central bank urged commercial banks to close their currency exchange offices until March, and to handle all exchange operations from their headquarters, according to the abc.az/ Fineko website. The move reportedly pushed the cost of the dollar to AZN2.2-AZN2.5 on the black market, 1.5 times higher than the official rate.

As ordinary Azerbaijanis grapple with everyday problems, Finance Minister Samir Sharifov called for a switch to a four-year "saving mode" in public finances, fiscal responsibility and the elimination of all non-essential expenditure from the government's balance sheets during a speech to parliament on January 12.

Baku has already begun to streamline its operations, including by merging government departments. The foreign ministry is reportedly planning to reduce the number and size of its embassies, and state-owned companies such as Azerenergy, Azerigaz, and Azerbaijani Railways plan to reduce their staff by 15% to 20% this year.

The low price of oil is badly hurting the Azerbaijani economy and public finances as oil and gas account for over a third of GDP, 70% of budget revenues and 90% of exports.

On January 10 President Ilham Aliyev claimed that the economy grew by 1% in 2015, but data from the country's State Statistical Committee reveals that GDP declined by 6.7% to AZN50.1bn (€29.5bn) in nominal terms in January-November 2015. If the annual inflation rate, which was officially 3.8% in January-November is factored in, the drop would be even higher.