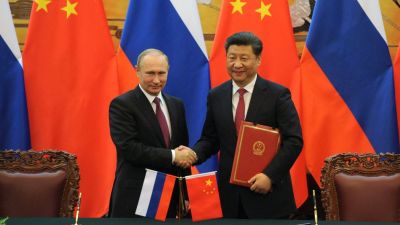 With China due to move ahead of the US and EU in purchasing power parity GDP following Britain's decision to exit the Union, a delegation of Russian company chiefs led by President Vladimir Putin announced investment initiatives worth $50bn during meetings in Beijing.

"Fifty-eight various business initiatives with the total volume of investments of $50bn, have been selected," Putin told journalists in the Chinese capital on June 25 at the end of a crucial two-day visit to drum up new business, much of it in the energy sector. Twelve of the projects are already being implemented, Putin said.

The trip is expected to boost the 'pivot East' Russia announced as its relations with the West deteriorated in 2014 after the annexation of Crimea and Moscow's support for separatist forces in East Ukraine.

Overshadowed by the June 23 referendum in Britain in which 52% of Britons voted to leave the EU, Putin's stay in Beijing was seen as cementing the two countries' declared "strategic partnership" with raft of deals in energy, trade and technology. Praising "very meaningful work" done so far, Putin said the sides can boast "very profound discussion that ends with  results". Their views on many geopolitical issues "are either very similar or coincide", according to the president.

"President Putin and I equally agree that when faced with international circumstances that are increasingly complex and changing, we must persist even harder in maintaining the spirit of the Sino-Russian strategic partnership and cooperation," added Xi, declaring that the countries will be "friends forever". Bilateral trade between Russia and China in January-May amounted to $25.8bn, RIA Novosti quoted the Chinese president as saying.

Meeting Xi for his 15th time since 2013, Putin was accompanied by a heavyweight group of top officials, including the head of the Kremlin Administration Sergei Ivanov, five deputy prime-ministers and several ministers, as well as the heads of Rosneft and Gazprom oil and gas companies.

Signed deals included an agreement between Rosneft agreed with China National Chemical Corporation (ChemChina) that the Chinese firm would take a 40% stake in Rosneft's planned petrochemical complex in Russia's Far East, TASS reported. Rosneft also signed the agreement to sell 20% of its subsidiary Verkhnechonskneftegaz to the Beijing Gas Group.

An oil supply contract, under which Russia could deliver up to 2.4mn ton of crude oil to ChemChina in a year's time, was also agreed. Rosneft's CEO Igor Sechin said that Russia will not reduce the volume of oil supplies to the Chinese."We will stick to the volumes we have agreed on. It's around 40 million tonnes (per year)," the news agency quoted Sechin as saying.

Rosneft also signed a framework agreement with Sinopec about construction of a gas processing and petrochemical plant in East Siberia, with the aim of setting up a joint venture in 2017 focused on the Russian and Chinese markets.

The two governments also signed an agreement to cooperate under a programme to build an advanced civilian heavy helicopter. Under the deal, state-controlled Russian Helicopters will provide technologies and development proposals for the planned 38-ton helicopter with a lifting capacity of up to 15 tons.

Meanwhile, after Britain voted to leave the EU, Russia's former finance minister and current co-chair of the presidential economic council Alexei Kudrin, said the European Union is now third after China and the United States by purchasing power parity (PPP) GDP as a result of Brexit.

"Brexit changes the order of global leaders: the European Union becomes third ($16.5 trillion) by PPP GDP and leaves the second place with $19.2 trillion. [Now it is] after China ($19.39 trillion) and the US ($17.95 trillion)," said Kudrin, who also heads of the Center for Strategic Research in Moscow.

Speaking in Uzbekistan on his way to China, Putin said of the Brexit vote would have consequences for Russia too: "This will, certainly, have consequences for Britain, for Europe, and for us," the president said. "The consequences will be global, they are inevitable; they will be both positive and negative. The markets will certainly shrink, they have already shrunk, but everything will be certainly restored," TASS quotedPutin as saying in Tashkent.

The oil price declined and the pound and the euro rate "are also under pressure", added Prime Minister Dmitry Medvedev, speaking in St Petersburg on June 24. "Volatility of commodity and stock markets becomes much higher. We are not happy with that," he added.

Before the landmark vote, many commentators and also British Prime Minister David Cameron said "Putin might be happy" if the British public opted to leave, because this can strengthen Russia's hand in its dealings with a weaker EU. This can also affect the resolve of EU members to maintain economic sanctions imposed on Russia in 2014 for its actions in Ukraine.

bneGREEN: Coal emerges down, but not out, from Glasgow

bneGREEN: Beyond Oil and Gas Alliance aims to end oil and gas production