Is dusk falling on Georgia's image as a business haven? Pictured is Tbilisi's Old Town, with the new downtown on the horizon.
By Neil Hauer in Tbilisi September 10, 2021

In the South Caucasus republic of Georgia, political crises are almost a way of life. The country seemingly lurches from one to the next, its institutions barely holding together in the endless struggle between the gaffe-prone ruling party, Georgian Dream (GD), and its archnemesis, the United National Movement (UNM) of former president Mikheil Saakashvili. The nightclub raids of May 2018 ushered in an era of almost-permanent tension, with one toxic snap election or heavy-handed police action giving way to another. The country’s democracy has been slowly backsliding for three years and counting.

Despite this, Georgia's image as a business haven has largely held out, buoyed by the small nation's favourable appearance as an EU-aspiring democracy and flashy statistics on the ease of doing business. That phase, however, seems to have reached its limits. A raft of recent scandals impacting on relations with the West, major failed investment deals and a corrupt and unreformed judiciary have nearly ground investment to a halt. Whatever goodwill is left for Georgia in the Western business community, is quickly evaporating.

The proximate cause of the latest degradation was the appointment in February of a new hardline set of ministers to head the GD government. Georgian Dream, which has ruled for nearly a decade, is in practice the fiefdom of one man: Bidzina Ivanishvili, the billionaire oligarch who runs the party from the shadows and selects pliable—and ideally also competent—ministers as he sees fit.

The latest prime minister on this carousel, Giorgi Gharibashvili, has been nothing short of catastrophic. Since his February appointment, his acrimonious and confrontational style has led GD’s Georgia to depths yet unplumbed, highlighted by the fallout from a far-right anti-LGBT/media pogrom in Tbilisi on July 5 and his government’s steadfast refusal to punish the perpetrators—part of a cynical ploy to appeal to highly conservative voters ahead of the October 2 mayoral elections. Since then, the government has also pulled out of an EU-brokered deal with the opposition and refused an EU loan conditioned on judicial reform.

None of this, to put it lightly, has gone unnoticed by the business community.

“It couldn’t go much lower than it has,” said one Western businessman with a years-long history in Tbilisi, speaking on condition of anonymity. “Investment has dried up almost entirely.”

The new cabinet, led by Gharibashvili and other hardliners such as newly appointed deputy PM Tea Tsulukiani, is at the heart of the issue.

“Previously there was at least a pretense of reform, under the previous PM [Giorgi Gakharia, now running as an opponent of GD in the Tbilisi mayoral race],” the businessman said. “I don’t think anyone thinks they’re interested in that anymore. The only thing Gharibashvili is interested in is consolidating power,” he added.

“The problem [with recent events] is that the general sentiment [among investors] was already sceptical,” the businessman said. “Now, the risk is that Georgia falls into a category from which it won’t recover easily—that it will take years to come out of, if it does at all.”

“In the last six months, we had the first exit of a Georgian startup ever, courtesy of an investor in Silicon Valley,” Donohue said. “The tech startup scene is actually looking quite good. There’s been a real maturation since I got here five years ago, with a strong talent pool [now] that can interact with Western capital,” he added. 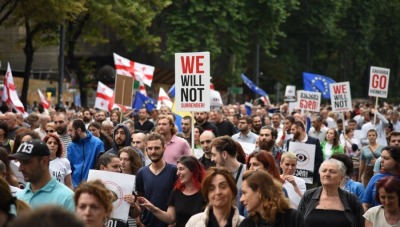 He admits too, though, that recent political developments have spooked some.

“I think people are definitely waiting and seeing a bit how serious the government is [with anti-EU/US pushback],” Donohue said. “We’ll definitely know more in six months [on that front].”

But while the government’s precise behaviour going forward is unclear, there’s one sector where the problems are much more intractable: the courts.

Georgia’s court system has long lagged behind other reforms in the country’s institutions. After several failed attempts, the judicial system has now become a political force in its own right, controlled by a cadre of powerful judges who operate outside the law.

“Judicial reform was never very serious in Georgia, but before there were at least plausible excuses,” said the anonymous businessman. “There was certain progress made, before the past year.”

“The key takeaway for any investor who arrives here is that already on day two he or she is very worried about the courts,” he continued. “The judiciary is comprised of a clan. You need to bribe judges, to know the right people to bribe, and essentially to retain lawyers who can guarantee certain outcomes in the courts.”

The failure of Georgia’s court reforms has been well-documented. The Coalition for an Independent and Transparent Judiciary, a watchdog and advocacy group composed of Georgian NGOs, released an extensive report in 2017 documenting the politicisation and bribery in the courts, along with a general lack of political will from the government to change the situation. More recent statements from the Coalition on Georgia’s judiciary, especially the recent Supreme Court appointments, have not been any more positive.

'Why go through this?'

“So [potential investors] come here, they see this, and they think, why go through this?” the businessman remarked. “People have to do similar things in Ukraine, but it’s a much bigger market. Georgia is in the position where it’s both too corrupt and too small a market, with limited purchasing power, for most people to bother,” he said.

Coupled with this have been several larger scandals. The most spectacular was the collapse of the Anaklia Port Project on the Black Sea coast. Intended to finally develop Georgia’s first deep-sea port and create a major international shipping and transit hub, the project was inaugurated to great fanfare in 2015 with a consortium of Georgian backers (led by TBC Bank), US, UK and Bulgarian firms winning the construction bid. But in 2018, an investigation launched against TBC Bank chairman (and Anaklia Consortium head) Mamuka Khazaradze for seemingly political reasons on Ivanishvili’s behalf set off a chain of events that resulted in Khazaradze forming his own opposition political party and the Anaklia port’s official cancellation in early 2020.

The fallout from the case resulted in condemnation from numerous US congressmen against Georgia’s governance conditions, a decline in US investor views of Georgia, and an arbitration case by some of Anaklia’s investors against the government.

Some of the lost Western investment, from both Anaklia and more recent events, has been made up for by other actors. But they, too, have encountered problems.

“There are some non-Western investors still interested [in Georgia],” the anonymous businessman said. “Business groups from Central Asia and Azerbaijan especially, who can’t bring their money to the EU for various reasons, are investing.”

A consortium based in the latter now faces their own uphill struggle against the unreliable courts. In 2019, NEQSOL Holdings, a Baku-based investment group, purchased a 49% stake in Georgian internet provider Caucasus Online. Georgia’s National Communication Commission, however, shortly thereafter claimed to have never approved the project and appointed their own special manager to take over Caucasus Online, in what seemingly amounted to an effective nationalisation of the firm.

This occurred alongside new amendments in Georgia’s communication laws, further degrading the (already low) likelihood of receiving a fair trial. The new amendments were explicitly criticised by the Council of Europe’s Venice Commission, which called on the Georgian government to carry out a full reexamination of them. NEQSOL has, meanwhile, referred the Caucasus Online case to international arbitration, where it currently sits.

Much to be desired

With local elections less than a month away, the state of the business environment leaves much to be desired. It’s unlikely to cost Georgian Dream much in the short term—incumbent Mayor of Tbilisi, former footballer Kakha Kaladze, is expected to win reelection handily—but international goodwill will be much harder to win back.

Donohue hopes that a more pluralistic environment will shift the equation.

“Right now, one party [Georgian Dream] has a lot of power and they have had it for some time,” he said. “If they lose some, that could change [their recent approach].”

For the other Western businessman, it’s hard to be positive.

“It’s simply going to be impossible to turn things around with Gharibashvili as PM,” he said. “He’s established himself as such a toxic figure that doesn’t miss an opportunity in a crisis to make it worse, and he’s so personally vindictive that investors trust [his administration] less than ever. Things are going to get worse before they get better.”