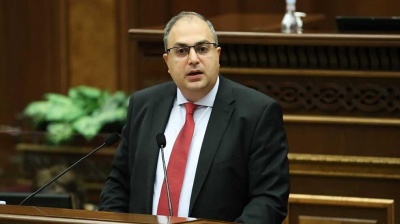 Vladimir Vardanyan, the lawmaker who co-authored the new law, makes a case for it during the July 30 session that ratified it. / National Assembly of the Republic of Armenia Websi
By Mania Israyelyan for IWPR August 19, 2021

Freedom of speech advocates have condemned a new law in Armenia that criminalises “severe insult” to public figures, warning that the legislation is not only impractical but could be used to political ends.

The law, sponsored by the ruling My Step faction, stipulates that inflicting severe insult, using foul language or hurting the dignity of a person involved in public activity—which could include officials, politicians, civil society activists and others—carries a maximum penalty of Armenian dram (AMD) 100,000-500,0000 ($200-$1,000).

If the perpetrator regularly targets one person, the fine can rise to between one and three million dram ($2,000-$6,000) or up to three months in prison.

One of the bill’s co-authors, the ruling My Step’s Vladimir Vardanyan, said that “foul language in our society, a phenomenon that causes the most serious damage to human dignity, must be eliminated,” adding that the new law should particularly target social media.

However, critics note that the term “offensive” as used in the legislation is extremely vague.

Ashot Melikyan, chairman of the Committee to Protect Freedom of Expression, said the criminal code mandated the punishment without defining the foul language that constituted the offence.

The law is not “practical and leaves a broad spectrum of subjective perceptions and arbitrariness,” he concluded.

She warned that the legislation would likely be used to protect the powerful, adding that the government had to be even-handed in its approach to enforcement.

“How is it that human rights activists and [opposition] politicians receive insults and threats and those criminal cases vanish because no one wants to do anything?” she asked. “In fact, laws [should be] there to protect society, not the authorities.”

The courts are supposed to consider each case on its merits, but given that there is no thorough definition of severe insult, there are fears that the law could become a tool for politically motivated prosecutions. Some fear that journalists and bloggers will be pushed into self-censorship due to the potentially loose interpretation of the concept of foul language.

Sofya Hovsepyan, a former My Step lawmaker who left the faction to sit as an independent, said that it could lead to legal action, “when there is no apparent criminal element but certain words or phrases carrying insulting connotations towards high officials… A human being should be protected in all situations, not by the positions they hold,” she said.

“When they punish their allies, who use foul language and exercises physical violence, then they will have the right to demand [that others obey]. Otherwise they have no moral right to demand anything, no matter how well they package and present it as a law,” Karapetyants agreed.

Information security expert Samvel Martirosyan said that it was ludicrous to think the legislation, which was voted into effect on July 30, could eliminate abuse on online platforms.

“Half of the users are not physically in Armenia and the law will not affect them,” he said, noting that it was very easy to open a fake account. “How are police and courts going to track thousands of offenders?”

Media specialist Ara Ghazaryan disputed whether such legislation was even in the public interest, noting that in Europe the trend was towards the decriminalisation of defamation, with the new Armenian law unlikely to correspond to international norms that insult should not be punished with detention.

Former My Step lawmaker Taguhi Tovmasyan, who now represents the I Have Honor opposition faction, noted that the Armenian constitution laid out that foul language was a violation of the human right to dignity.

“But the question arises whether the relevant amendment to the law will provide effective protection mechanisms. I think it will not,” she said.

There was no consultation on the bill, and experts warned that this combined with its hasty adoption was a marker of its poor quality.

Tovmasyan said that education was an essential tool for the solution of the problem of the abuse of public figures, arguing that this was the best way to help people value respect over obscenity.

“But the respective state bodies must demonstrate a real desire and will - and the process must be strictly under supervision,” she concluded.

This article from the Institute for War & Peace Reporting (IWPR) originally appeared on iwpr.net here.

This publication was prepared under the "Amplify, Verify, Engage (AVE) Project" implemented with the financial support of the Foreign Ministry of Norway.

Belarus’ turn to China
7 hours ago
East and West clash in Bulgaria’s snap general election
19 hours ago
Old faces set to keep ruling Bosnia post-election
1 day ago
Georgia’s border clogged with thousands of Russians fleeing the Kremlin’s mobilisation
1 day ago
Meloni won the elections, but her programme won’t make Italy the next Hungary
1 day ago