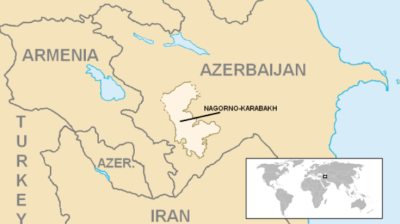 Azerbaijan has remained silent on the claims of troop incursions in southeastern Armenia. / Aivazovsky, public domain.
By bne IntelIiNews May 13, 2021

Armenia on May 13 asked the Moscow-led Collective Security Treaty Organization (CSTO) to respond to Azerbaijan violating its sovereign territory with a deployment of troops to a position three kilometres beyond the border between the two countries.

Following the May 12 advance of Azerbaijani forces to around Sev Lich (Black Lake) in Armenia’s southeastern province of Syunik, the Armenian Defence Ministry on May 13 added that Azerbaijani soldiers subsequently also infiltrated land beyond two other sections of the Armenian-Azerbaijani border near Vardenis, in the southeastern province of Gegharkunik, and Sisian, in Syunik province, under the pretext of “border adjustments”. It said they were stopped by Armenian army units that demanded an immediate retreat to the Azerbaijani side of the frontier.

Armenia has asked the CSTO to invoke Article 2 of its founding treaty that commits the bloc—made up of Russia, Armenia, Belarus, Kazakhstan, Kyrgyzstan and Tajikistan—to discussing a collective response to grave security threats facing any of its member states.

Acting Armenian Prime Minister Nikol Pashinian cited the need for “preventing a further escalation of the situation and protecting the territorial integrity, stability, and sovereignty" of Armenia. He said Azerbaijani troops were continuing to use obviously fake maps to stake claims to territory.

Viktor Biyagov, Armenia's permanent representative to the CSTO, addressed the CSTO Permanent Council, claiming Azerbaijan was guilty of a provocation that was a serious threat to regional security and stability.

He added that if Azerbaijani troops did not retreat from the territory of Armenia within a reasonable time, the entire responsibility for the further escalation of the situation would lie with Baku.

The CSTO issued a statement reading: "The CSTO is closely following the development of the situation in the border regions of the Syunik province of Armenia. As the situation develops, if necessary, actions will be taken provided for by the provisions of the Collective Security Treaty and the CSTO Charter."

Armenpress reported in the early hours of May 14 that Pashinian had a telephone conversation with French President Emmanuel Macron on the latter's initiative to discuss what they agreed was an alarming situation. Macron reportedly expressed his support for the Armenian authorities and people in securing a peaceful settlement of the issue and reaffirmed France's commitment to the territorial integrity of Armenia, stressing the need for the immediate withdrawal of the Azerbaijani troops.

Late on May 12, Pashinian told an emergency session of the Armenian Security Council that “given the situation, our priority is to resolve this problem through negotiations, as well as diplomacy. But this is one of the options. I want us to understand that we cannot tolerate and put up with the current situation. At the Security Council, we must discuss the situation and our further actions and possible scenarios.”

In the US, Congressman Adam Schiff, a Democrat who is chair of the House Intelligence Committee, expressed his deep concern at the reports of Azerbaijani troops crossing into Armenian territory.

“If true, this is yet another dangerous and provocative action that could lead to further loss of life. It is past time for the United States to recognize that our policies have emboldened Azeri President Ilham Aliyev to escalate militarily, risking another war,” Schiff said in a statement.

Schiff added that he had been in communication with the Biden administration to urge them to engage more deeply through the OSCE Minsk Group, the three-decade-old group co-chaired by Russia, the US and France, which was set up to achieve a peaceful, negotiated resolution of the Nagorno-Karabakh conflict.

Schiff added: “According to reports, Azerbaijan is taking these actions just days after the [US]State Department issued an unjustified waiver of restrictions under Section 907 against direct aid to Azerbaijan. We should not be providing military funding to a nation that habitually engages in human rights violations and violates the sovereignty of its neighbors.”

"We understand communication between the parties is ongoing and urge restraint in de-escalating the situation peacefully," US State Department spokesman Ned Price wrote on Twitter.

Azerbaijan has not commented on the allegations of troop incursions.

The Minsk Group has shown little standing or influence since Russia went it alone in formulating a ceasefire deal to last November halt the fighting over Nagorno-Karabakh, which claimed several thousand lives.

Azerbaijan’s move at Sev Lich, around a third of which is within Azerbaijan, might amount to some sabre-rattling as Baku tries to pressure Russia to push Armenia to speed up the delivery of concessions made in the ceasefire agreement. Aliyev has in recent weeks grown noticeably frustrated at the slow pace of progress on matters such as a proposed land corridor that would run from Azerbaijan across Armenia to the Azerbaijani exclave of Nakhchivan on the Turkish border. Close ally of Baku, Turkey, is also very keen to see this corridor materialise, given its economic and geopolitical ambitions. Iran is keeping a close eye on the current standoff and the potential for further clashes over, or the development of, the corridor given the proximity of the theatre of dispute to its border.