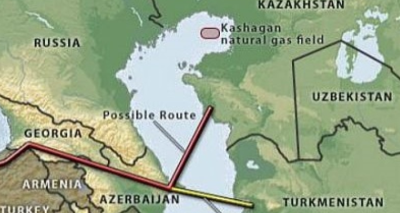 The idea of a major trans-Caspian pipeline has been going nowhere for decades, but a simple connector line linking offshore fields would open up significant Turkmen capacity to supply Europe with gas. / Strati.az
By Will Conroy in Prague December 13, 2022

Turkmenistan has informed US diplomats that it is not interested in a modest connector project that would allow some substantial Turkmen gas flows to cross the Caspian Sea for further transit via Azerbaijan, Georgia and Turkey to European markets, according to two academics.

“[Turkmenistan] is signaling that it won’t get out of bed for anything less than the decades-old idea of a 30 bcma [billion cubic metres per annum] pipeline. Building such a line, and more importantly arranging the onward transportation and sales in Turkey and EU, would be far more complicated than a simple connector,” wrote John Roberts, a a senior nonresident fellow at the Atlantic Council Global Energy Center and Julian Bowden, a former economist with BP and a senior visiting research fellow with the Oxford Institute for Energy Studies (OIES), in an analysis published by the Atlantic Council.

They added: “Moreover, Turkmenistan would probably demand a long-term contract structure which the EU itself cannot provide, and which European companies might be reluctant to sign. Overall, nothing could be completed before 2030, by which time the EU should have resolved its current [energy] supply crisis and be far along the path to a renewables-based energy future.”

The authors of the analysis acknowledged in a footnote that they are on the advisory board of a project to lay a 78-kilometre connector line between the Petronas-operated Magtymguly field in Turkmenistan and gas-gathering facilities operated by BP in Azerbaijan’s Azeri-Chirag-Gunashli oilfield.

They also observed: “On November 25, Azerbaijan’s President Ilham Aliev delivered the most pertinent summary of the current impasse. Asked by one of the writers of this piece about the status of discussions on a trans-Caspian Pipeline, Aliyev said it was up to Turkmenistan: ‘They have to make a decision. They want us to do it. They will have to take some action. We will not initiate action.’”

Turkmenistan has the fifth largest gas reserves in the world, but China stands as its sole major gas export market. Moscow might frown on any Turkmen willingness to enter into a project that could replace vast amounts of Russian gas no longer available to Europe given the fallout over the Ukraine war.

Roberts and Bowden concluded that the “problem is the near-total mismatch between European requirements and Turkmenistan’s aspirations. Europe wants gas now. In technical terms, this could be accomplished in relatively short order, such as through the Trans Caspian Connector project. This would link Turkmenistan’s and Azerbaijan’s offshore facilities with a 78-km pipeline, and could be put in place at an estimated cost of around $400-600 million within a few months of securing the necessary approvals of both countries and the necessary financing.”

On the other hand, they said, “a 30-bcma system from Turkmenistan to Italy, roughly twice the size of the SGC [Southern Gas Corridor already running from Azerbaijan to Italy], would cost vastly more than the $20 billion required for the SGC’s initial pipeline components”.

Turkmenistan already has some capacity to feed gas to Europe via the Azerbaijan route, thanks to gas swap pipeline arrangements made with Iran. The analysis authorts noted, however: “Although the current swap via Iran demonstrates that gas from Turkmenistan can already reach Azerbaijan by pipeline, either directly or indirectly, lack of transparency and a 3 bcma limit to Iranian pipeline capacity render it almost irrelevant in the context of European supply.”