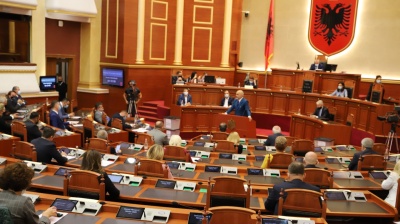 The Albanian parliament voted to impeach President Ilir Meta for violating the constitution at an extraordinary session on June 9.

MPs voted by an overwhelming majority of 104 to seven with three abstentions to dismiss the president for violating the constitution.

The impeachment is not effective immediately as the final decision will be made by the Constitutional Court within three months.

MPs from Albania’s ruling Socialist Party announced immediately after the April 25 general election, that delivered the party an unprecedented third consecutive mandate, that they would seek to dismiss Meta.

Meta, the former leader of the opposition Socialist Movement for Integration (LSI), was one of the most vocal critics of Prime Minister Edi Rama, leader of the Socialist Party, during the election campaign.

Socialist MPs say the president failed to guarantee national unity, as required under the constitution, by supporting the opposition in its attempt to unseat the Socialists.

The president has a largely ceremonial role, but has some authority over the judiciary and the armed forces.

Meta has claimed that the impeachment plan is intended to distract from abuses in the April general election, and refused to appear before the committee. On the day of the vote, he continued with his usual presidential duties and has not commented on the impeachment.

However, presidential spokesman Tedi Blushi issued a strongly worded statement on Facebook, referring to the “parliamentary landfill” that will serve as a “case study in the world history of parliamentarism, how an assembly without opposition, which, although dismissed by the people, votes for the dismissal of another institution!”

The vote took place after an Albanian parliament committee issued a report recommending the impeachment of Meta on May 28. The report said that Meta had violated 16 articles of the constitution ahead of the April 25 general election, a parliament statement said at the time.

The report, quoted by committee chair Alket Hyseni, says that “with his activity and statements during the election campaign and the day of the election silence, the president of the republic violated the constitution.”

“The constitutional violations consumed by the president have had a negative impact on the functioning of the state and the social, political and economic spheres of the country,” it added.

Impeachment requires a two-thirds majority in Albania’s 140-seat parliament, which the Socialists do not have. However, in the current parliament many of the opposition MPs are “reserves” appointed after members of the two main opposition parties decided to relinquish their mandates, and many of them backed the impeachment.

Once the new MPs elected on April 25 take office, the Socialists will still have a majority, but the opposition will be composed of newly elected members of the Democratic Party and the LSI, both fierce opponents of the Socialists.

Meta is a former member of the Socialist Party, who left to set up the LSI in 2004. The LSI was a junior partner in Democratic Party governments before switching to support the Socialists when Rama first became prime minister in 2013. Socialist MPs then backed Meta to become president in 2017 (in Albania the president is elected by the parliament).

However, relations between Rama and Meta later deteriorated. The Socialists won a majority in the 2017 general election that allowed them to dispense with the LSI’s support and form a government alone, and ahead of the 2021 general election the LSI – now headed by Meta’s wife Monika Kyremadhi – struck an alliance with the Democrats.

Meta, meanwhile, indicated after the election that he would serve his full term as president, and talked of a return to the LSI after his term comes to an end in 2022.