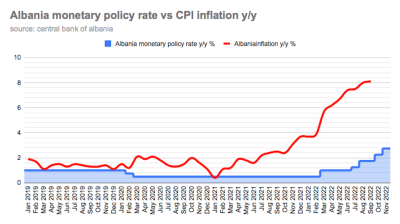 The Albanian central bank said that high inflationary pressures remain the main risk to sustainable and long-term growth in the country. Inflation reached 7.9% during the third quarter of 2022.

A statement from the central bank said that the gradual normalisation of monetary policy is necessary to rein in inflation, and the normalising cycle will continue.

The central bank said that inflationary pressures are increasing and their base appears to be expanding.

The overall increase in inflation reflected primarily higher food, oil and transport costs, which together accounted for around 80% of total inflation in the third quarter. However, the price increases are now appearing across most of the consumer basket.

"From the macroeconomic point of view, the increase in inflation reflects – to the greatest extent – the strong pressures coming from the foreign environment, but also a growing contribution from the domestic environment,” said central bank Governor Gent Sejko.

Albania’s economy continued to grow despite the shocks stemming from Russia’s invasion of Ukraine. According to statistics office Instat, the economy grew by 2.2% in the second quarter, and cross-sectional data suggest that growth continued in the third quarter.

However, Sejko noted that growth has slowed since the first quarter of the year, which “reflects the negative effects stemming from high levels of inflation, both domestically and globally”.

The Bank of Albania expects that over the next two years the Albanian economy will continue to grow and inflationary pressures will decrease.

Inflation is predicted to remain high in the fourth quarter of the current year, but to be progressively reduced during 2023 and to return to the target in the second quarter of 2024, the statement said.

However, the Bank of Albania warned of heightened uncertainty ahead, with risks tilted to the upside for inflation.

Hungary’s GDP growth slows to 4.0% in Q3
23 hours ago
Poll shows only one in five Moldovans happy with their government
23 hours ago
Montenegro’s tourist arrivals almost double y/y in October
23 hours ago
LNG in Europe: ready or not?
23 hours ago
Russia’s GDP at 4.4% decline in October, construction and agro stick out
1 day ago