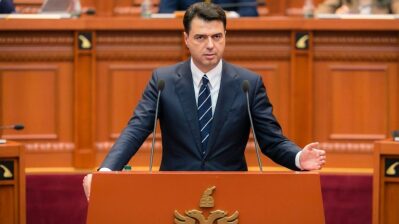 Berisha has been trying to oust Basha as party leader ever since he was made persona non grata by the US — where diplomats said he was involved in “significant corruption” — in May, prompting Basha to expel him from the party's parliamentary group.

Following a tour of the country to drum up support among Democratic Party members, Berisha hosted his own unofficial national assembly at the Air Albania Stadium in Tirana, with a huge turnout.

Of the 4,934 delegates who attended the assembly,  4,446 voted in favour of dismissing Basha while a mere 36 were against.

Delegates at the assembly called by Berisha also voted on a new statute for the party, and presented a new symbol and seal.

Writing on Facebook, Belind Kellici, who headed the assembly, called the vote "a historical turning point”.

“I haven't seen such enthusiasm in the Democratic Party for many years,” he wrote.

“When I have white hair I will proudly say that on December 11, 2021 I was also there, among thousands of young people, to lay a foundation stone in the Democratic Party!”

Plans to hold a referendum for all party members on December 18 on whether to support the decision to remove Basha were announced at the assembly. New leaders would then be elected in March 2022.

However, Basha says he won’t give in to pressure from Berisha to quit. At a meeting of the party’s national council on December 12, headed by Basha, a statement was adopted declaring that all the steps taken at the previous day’s assembly were illegal.

It adds that the party leadership “considers that the ‘Berisha' movement and yesterday's rally … are an attempt to delegitimise the institutions of the Democratic Party until its dissolution as the most pro-Western force in the country, aiming to turn it into a bunker for the protection of the interests of Sali Berisha personally in front of the US.”

Basha decided to exclude Berisha from the Democrats’ parliamentary group after the latter was named by the US State Department as persona non grata due to his involvement in “significant corruption” in May.

“In his official capacity as prime minister of Albania in particular, Berisha was involved in corrupt acts, such as misappropriation of public funds and interfering with public processes, including using his power for his own benefit and to enrich his political allies and his family members at the expense of the Albanian public’s confidence in their government institutions and public officials,” the May statement from the State Department said.

Berisha dominated the political scene as prime minister and president from 1991 to 2013. He was Albania’s second post-communist president, holding the post from 1992 to 1997, going on to become prime minister from 2005 to 2013, which makes him Albania’s longest-serving democratically elected leader. He twice headed the Democratic Party, which has been in opposition since he resigned in 2013, when the Democrats were ousted from power by the Socialists led by Albania’s current prime minister, Edi Rama.

Basha was mayor of Tirana from 2011 to 2015, having previously served as first minister of public works, transport and telecommunications and later as interior minister under Berisha.

After the loss of the April 2021 election – which Basha called an “electoral massacre” and claimed was rigged – several high ranking members of the Democratic Party called on him to resign. However, he successfully stood for re-election as party leader in the summer leadership election.