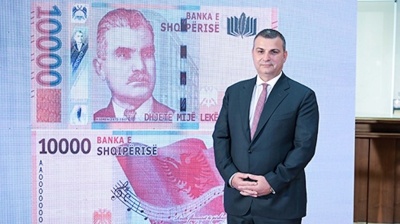 The Bank of Albania is putting in circulation an ALL10,000 banknote, with a value of just over €80, for the first time.

Demand for cash has been increasing as the economy expands, while banking penetration is relatively low. There has been a further boost to demand since the start of the pandemic.

The ALL10,000 note is part of a new series of banknotes being introduced between 2019 and 2022. It is twice the value of the ALL5,000 note, previously the highest denomination in circulation in Albania.

The note has the symbols of the Albanian flag and national anthem and a portrait of Aleksandër Stavre Drenova, also known as Asdreni, the author of the national anthem. It will become legal tender from June 31.

It is being put into circulation at a time of low and steady inflation that has persisted for several years, including throughout the economic disruptions of the coronacrisis. This has prompted the supervisory council of the Bank of Albania to maintain the base rate at a record low 0.5%.

Inflation has shown a modest rise in recent months, pushed up by higher international commodity prices, according to the International Monetary Fund (IMF), but remains well below target. The central bank expects inflation to return gradually to its 3% target during 2022 as the economy emerges from the crisis and economic activity normalises.

Central bank governor Gent Sejko said on June 15 that the new banknote was needed as the Albanian economy has expanded, but it remains cash-based to a high degree, despite gradually increasing banking penetration.

“This banknote of the highest denomination accompanies the economic development of the country and, according to all analyses, meets the market requirements to have it in the structure of our series of banknotes with legal exchange rate,” Sejko said when presenting the new ALL10,000 and ALL1,000 notes, the latest to be brought into circulation.

“Its introduction and circulation will enable a better and more efficient circulation of cash, helping the structure of the currency in circulation, reducing the costs of production, storage and distribution, and thus increasing the efficiency of Bank of Albania in the administration of physical money and issues,” he added.

“Despite the development of other means of payment, such as. electronic money, money in circulation continues to have an upward trend over the years, which reflects the continuing demand of the economy for physical money as a means of payment. The Bank of Albania carefully plans to guarantee the fulfilment of this market demand, both in normal and atypical situations.”

The Bank of Albania decided in 2016 to launch the new series of banknotes and had already brought the ALL200 and ALL5,000 denominations in circulation in September 2019. As well as adding a new denomination, the new banknotes are higher quality than earlier notes, with new security features, and the design has been refreshed.

According to De La Rue, which printed the notes, the new series of notes are the first polymer banknotes in Albania.

The Bank of Albania is continuing work complete the series with the final two banknotes, the ALL500 and ALL2,000, which are in the production process.