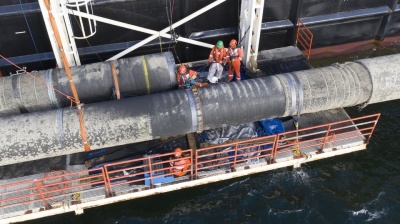 With the 1,200 km, multi-billion dollar Nord Stream 2 pipeline reported to be nearing completion, proposed sanctions against specialist pipe-laying operators could cause costly delays or even force its abandonment.
By Yigal Chazan of Alaco September 23, 2019

Tensions between the US and Europe over sanctions policy are rising once more with Congressional plans to stymie a controversial Russian-led energy project, just a year after US President Donald Trump dealt the Europeans a blow by renewing trade and investment restrictions on Iran.

With the 1,200 km, multi-billion dollar Nord Stream 2 pipeline reported to be nearing completion, proposed sanctions against specialist pipe-laying operators could cause costly delays or even force its abandonment. Driven by Russia’s state-owned energy giant Gazprom, the project would expand Russian gas exports to Germany and the wider European market, doubling the capacity of the existing Nord Stream pipeline.

While some Baltic and Central and Eastern European countries are opposed to Nord Stream 2, concerned it undermines energy security, Berlin in particular is keen to forge ahead with the enterprise – part financed by Western European energy companies – to reduce Germany’s dependence on coal and nuclear power.

Relations between Europe and the US have already been strained badly by President Trump’s decision last year to re-impose sanctions on Iran following his withdrawal from the JCPOA. The move was heavily criticised by the Europeans who have both continued to support the Iran nuclear agreement and sought to circumvent the US measures.

The emerging rift could undermine coordination of two of the world’s biggest sanctions programmes, a process fostered under the Obama presidency. Such cooperation is regarded as critical to pressuring rogue regimes, from Caracas to Pyongyang, into changing direction.

As Alaco’s sanctions guide reveals, Russia’s annexation of Crimea, intervention in eastern Ukraine and alleged meddling in the 2016 US elections have spawned a swathe of US and EU sanctions against Moscow, but the American ones have increasingly included secondary measures, aimed at non-US entities and persons. Theses have created problems for European companies wishing to continue doing business in Russia, compounding the EU sanctions they must adhere to.

President Trump, who has been reluctant to punish Russia for its excesses, has nonetheless given his backing for the Nord Stream 2 restrictions, not least because he wants the Europeans to buy more American liquified natural gas (LNG).  His concern is that there will be less demand for it once bigger volumes of cheap Russian gas are piped into Europe.

For Congress, geostrategic factors are also paramount, as underlined by the name of the sanctions legislation, the Protecting European Energy Security Act.

American legislators are worried that Europe is too reliant on Russia for its gas needs and should diversify supplies to counter Moscow’s perceived attempts to use energy to exert political influence. To reinforce the point, the sanctions could also affect the TurkStream pipeline project which will channel Russian gas under the Black Sea to Turkey and on to Europe.

The US is also exercised by the prospect of Nord Stream 2 allowing Moscow to largely bypass Ukraine through which much Russian European-bound gas passes, denying the fragile country important transit fees, amounting to $2bn-3bn annually, about 3% of its GDP. The concern is that this would strengthen Moscow’s leverage over the government in Kyiv at a time when the conflict in the east of the country remains unresolved and Crimea’s annexation by Russia is unrecognised by most of the international community.

Nord Stream 2 – 50% funded by Germany’s Uniper and Winterhsall, France’s Engie, Royal Dutch Shell and Austria’s OMV – is scheduled for completion towards the end of the year with Denmark’s objections over the pipeline passing through its territorial waters the main obstacle so far. Should the US sanctions be approved, the specialist pipe-laying companies might cease work on the remaining stretch of the project, as secondary US measures carry the threat of locking transgressors out of the American financial system.

The threat comes amid deteriorating economic and diplomatic relations between Europe and the US. Tariffs on European aluminium and steel imports and the possibility of further levies in retaliation for EU subsidies for Airbus have not gone down well in Brussels, exacerbating frustrations over the US withdrawal from the JCPOA.  The Europeans are keen to preserve the agreement, but this would require their banks and companies to continue engaging with Iran – and there is little to suggest they are prepared to do so because of US exposure.

Germany, France and the UK have sought to protect those who want to continue trading with and investing in Iran through a special purpose vehicle, known as the Instrument in Support of Trade Exchanges (INSTEX), that seeks to insulate them from US sanctions – but it has run into problems.

Initially confined to trading humanitarian goods, the project has ambitions to facilitate significant commercial transactions. Progress, however, has been reportedly held up by Iran’s failure to set up a mirror trading mechanism and fully adopt financial transparency conditions set by the Paris-based watchdog the Financial Action Task Force. Moreover, the US has threatened to sabotage INSTEX by sanctioning it.

The Iranians were counting on Brussels to keep the economic door open, but with European banks and companies seemingly nervous about engagement with Iran, its leaders are beginning to lose patience. They are threatening to row back on the JCPOA which would be a major blow for Europe, further straining relations with the Trump administration.

For the US president, alienating European allies through sanctions that undercut their interests is ill-advised. The administration has identified the use of trade and investment restrictions as a key means of achieving foreign policy objectives. But for the strategy to be truly effective, the US needs to ensure that European measures buttress its own. Disagreement over Iran and an impending fall-out over Nord Stream 2 could undermine such alignment, blunting the potential of sanctions to achieve policy goals.

Yigal Chazan is the head of content at Alaco. Alaco Dispatches is the business intelligence consultancy’s take on events and developments shaping the CIS region.

COMMENT: New rightwing Czech government will have a short honeymoon unless it learns lessons from the past
2 days ago
COMMENT: Russia coal mine explosion also highlights environmental tragedy
4 days ago
FPRI BMB Ukraine: 20 step plan to de-oligarchize Ukraine
5 days ago
NEMETHY: The economic vulnerability of Central European economies
6 days ago
HOMANS: Putin’s Choice – continue invading Ukraine or keep doing what he’s been doing?
6 days ago