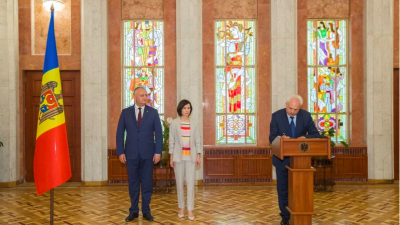 The enemy of my enemy is my friend. The proverb aptly describes the extraordinary developments in Moldova over the last few days, which have seen rival pro-Western and pro-Russian political forces overcome their stark differences to form a coalition government in order to keep a powerful, influential tycoon, Vladimir Plahotniuc, out of power.

In an unprecedented constitutional crisis that could yet end violently, this tiny, volatile state straddling the geopolitical fault lines between East and West has been witnessing an effective standoff between the new administration and a rival one dominated by Plahotniuc’s Democratic Party (PDM) — with the country’s constitutional court rejecting the authority of the former.

The pro-western DA-PAS and its unlikely ally the Russia-supporting PSRM — which formed their coalition after months of squabbling among the country’s three main parties in the wake of inconclusive elections in February — have also set another significant precedent. Their alliance has the blessing of the country’s international partners London, Paris and Moscow which have, in the past, had their differences over Moldova’s direction of travel. Indeed, it is thought that the DA-PAS and the PSRM only decided to throw in their lot after securing assurances of international support.

Given Moldova’s perennial instability — reflected by frequent political crises and scandals, notably the massive theft of funds from the country’s leading banks a few years ago — Russia and the West appear to have concluded that it is in their common interest to put geopolitical differences aside in the short term at least and stabilise the country. It is quite a remarkable development since relations between Moscow and its rivals have in other respects rarely been more fraught.

The PDM did not see this coming. With the clock ticking down on the deadline to form a government, they were expecting fresh elections to be called and when their rivals pulled a rabbit out of the hat the response was predictable. The Constitutional Court, some of whose judges are rumoured to be loyal to Plahotniuc, swung into action. It ruled that the new coalition was unlawful because it had been formed after the deadline for convening a government had elapsed — a charge disputed by the DA-PAS and PSRM. It then replaced the president with the prime minister of the PDM administration who promptly dissolved parliament and called for snap elections in September.

Since independence in 1992, Moldova’s political landscape has been dominated by a tug-of-war between Western- and Russia-leaning politicians who have exploited very real public anxieties about the country’s orientation to remain in power. Part of the country, Transnistria, broke away following independence and is occupied by Russian forces. Many Moldovans believe, rightly or wrongly, that Russia wants to regain the influence it once had over the country and fear that its move towards European integration may at some point provoke Moscow into action, just as many other Moldovans worry that they will become a Nato puppet.

Politicians from the rival camps, when they have had the opportunity, have done little to implement reforms, some preferring instead to enrich themselves. Moldova is one of the most corrupt countries in Europe and the banking scandal of 2014 when $1bn disappeared from three Moldovan banks underlined the severity of the malaise.

Against the background of the country’s highly polarised politics, Plahotniuc emerged from relative obscurity in the late noughties to become a hugely influential player both in business and politics, with his PDM controversially forming a government in the elections that followed the banking scandal. It fell well short of a majority yet managed to acquire one by persuading sufficient numbers of MPs from other parties to join its ranks.

Over the course of its term in office, the PDM was dogged by claims that it exerted control over prosecutors and judges who acted on its behalf to eliminate political rivals. Unsurprisingly, the party’s reform of the justice sector was regarded as a failure, with the EU suspending macroeconomic financial assistance as a result. Yet its record was not all bad. Banking reforms were deemed to be effective, with western investors becoming majority shareholders in local banks. Throughout, Plahotniuc’s presence loomed large, despite having no government role.

The power he exerts over Moldovan politics, for good or ill, is the main reason why the DA-PAS and PSRM eventually joined forces. Neither of them wanted to be junior partners in a coalition dominated by the PDM, which would have left Plahotniuc in the driving seat. They want to change the system of governance that the PDM created: to replace officials close to the party and undertake actions that it would oppose, such as the sacking of judges suspected of being implicated in corruption.

How the current impasse will be resolved is hard to predict. The police and the army have yet to take sides and there are fears that if the crisis escalates the country could witness the kind of nationwide disturbances that followed disputed elections in 2009. The PDM is holding firm and is not prepared to give way, not least because the new administration has suggested its rivals may face prosecution by a newly-appointed judiciary for decisions taken during their time in office.

For the international community, any attempt to mediate in the crisis carries significant risks. While there appears to be diplomatic backing for the new coalition government, any perceived interference in the standoff could ratchet up tensions. Both sides in this latest Moldovan drama have so far shown restraint and will be very much aware of the dangers of allowing the impasse to continue for very much longer.