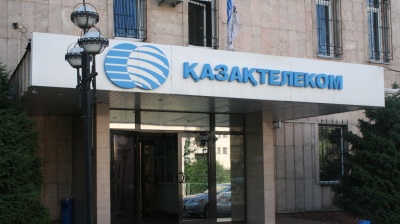 With Kcell in its stable, Kazakhtelecom will have a mobile phone market share of towards 70% in Kazakhstan.
By bne IntelliNews December 13, 2018

Kazakhtelecom chief executive Kuanyshbek Yesekeyevm, who spoke to reporters after the deal was signed, declined to disclose the amount paid for the stake. The move grants Kazakhtelecom near-monopolistic control over the mobile phone market in Kazakhstan, giving it a market share approaching 70%.

Kcell is Kazakhstan’s leading mobile provider. It had around 10mn subscribers and achieved €400mn in revenues in 2017, in a country with a population of 18mn.

Telia’s stake in Kcell amounted to 60.4%, while Turkcell’s shares made up the rest of the 75% stake bought by Kazakhtelecom.

Kazakhtelecom received the green light for the deal in July, after Kcell was subject to multiple allegations of copyright infringement valued at more than $100mn by the plaintiff, Kazakh company DL Construction. It was ordered by a local court to pay nearly $2mn in fines.

The stake was worth $650mn at the time when permission for the acquisition of the stake was granted.

Kazakhstan previously said it planned to carry out a secondary share issuance for Kazakhtelecom by the end of the third quarter of 2018, but the listing never came through. It will likely be rescheduled for 2019.

Earlier on December 12, Turkcell announced that Fintur Holdings had signed an agreement to transfer its 51% total shareholding in Kcell in Kazakhstan to Kazakhtelecom.

Retreat from Central Asia
Telia announced a retreat from Central Asia in 2015 as part of a shift to focus on its main markets in Nordic and Baltic countries. The Swedish company was deeply shaken by a corruption scandal in Uzbekistan and decided in 2015 to entirely withdraw from Central Asian countries after heavy investor and public pressure. In September 2017, Stockholm-based Telia and its Uzbek subsidiary Coscom LLC agreed in the US to pay a global foreign bribery penalty amounting to $965mn to resolve charges related to corruption.

Lars Nyberg, a former CEO of Telia, went on trial in September over allegations that $350mn was paid to Gulnara Karimova, the now disgraced daughter of the late Uzbek autocrat Islam Karimov, in return for “protection” from the Uzbek government and access to Uzbekistan’s 3G and 4G telecoms market.

Telia has since exited five of seven countries that were covered by its Eurasian unit: Nepal, Tajikistan, Georgia, Azerbaijan and Uzbekistan.

Turkcell announced in March this year that it would its Swedish majority partner Telia in selling its participations in its Kazakh and Moldovan subsidiaries.

Russia raises key rate to 6.5% amid strong inflationary pressure
6 hours ago
Erdogan’s relations with West in danger of renewed deterioration in ‘Varosha’ row
7 hours ago
Ukraine makes surprise policy rate hike to 8% to fight inflation
13 hours ago
US court rules Kyrgyzstan in contempt for pushing ahead with local legal action against Kumtor Gold
15 hours ago
Turkey extends 'undeclared state of emergency'
22 hours ago